Spitalfields has come a long way from the time that Jack the Ripper used to linger in its shadows.  Even 17 years ago when I used to work a couple of streets away in the glass-tower blocks surrounding Liverpool Street Station, the area was pretty dodgy.  I remember sending a junior associate out to get some coffee one night when my team was working late into the night.  The poor kid came back bemused because he had been propositioned by a prostitute on his coffee run.

Now Spitalfields is uber-trendy with boutiques, cafes and markets. I barely recognise it.  When did all these mainstream stores like Starbucks, Anthropologie and Valerie Patisserie become part of the landscape?

The History of Spitalfields

The Spitalfields area has always been an area of change.   Spitalfields was named after the hospital and priory located there in 1197.  A market started in a field near the priory which became quite popular.

Fast forward several hundred years and the Huguenots fleeing Catholic France in the 17th century settled in the area around Fournier Street. After the Huguenots, there was the Irish in the 18th century, the Jews in the 19th century and the Bangladeshis in the middle of the 20th century.

Jack the Ripper made the area notorious by picking of the destitute and desperate women of the area.  On the corner of Fournier Street across from Spitalfields Market, there is the Ten Bells pub where Annie Chapman was drinking on the 8th of September 1888 when she became a victim of Jack the Ripper.  Her body was found around the corner from the pub.

The old Spitalfields market was moved in the 1991 to Leyton which is further out in East London. The area has been subject to intense regeneration in the last part of the 20th century.  The 21st century has seen the arrival of hipsters and artists. 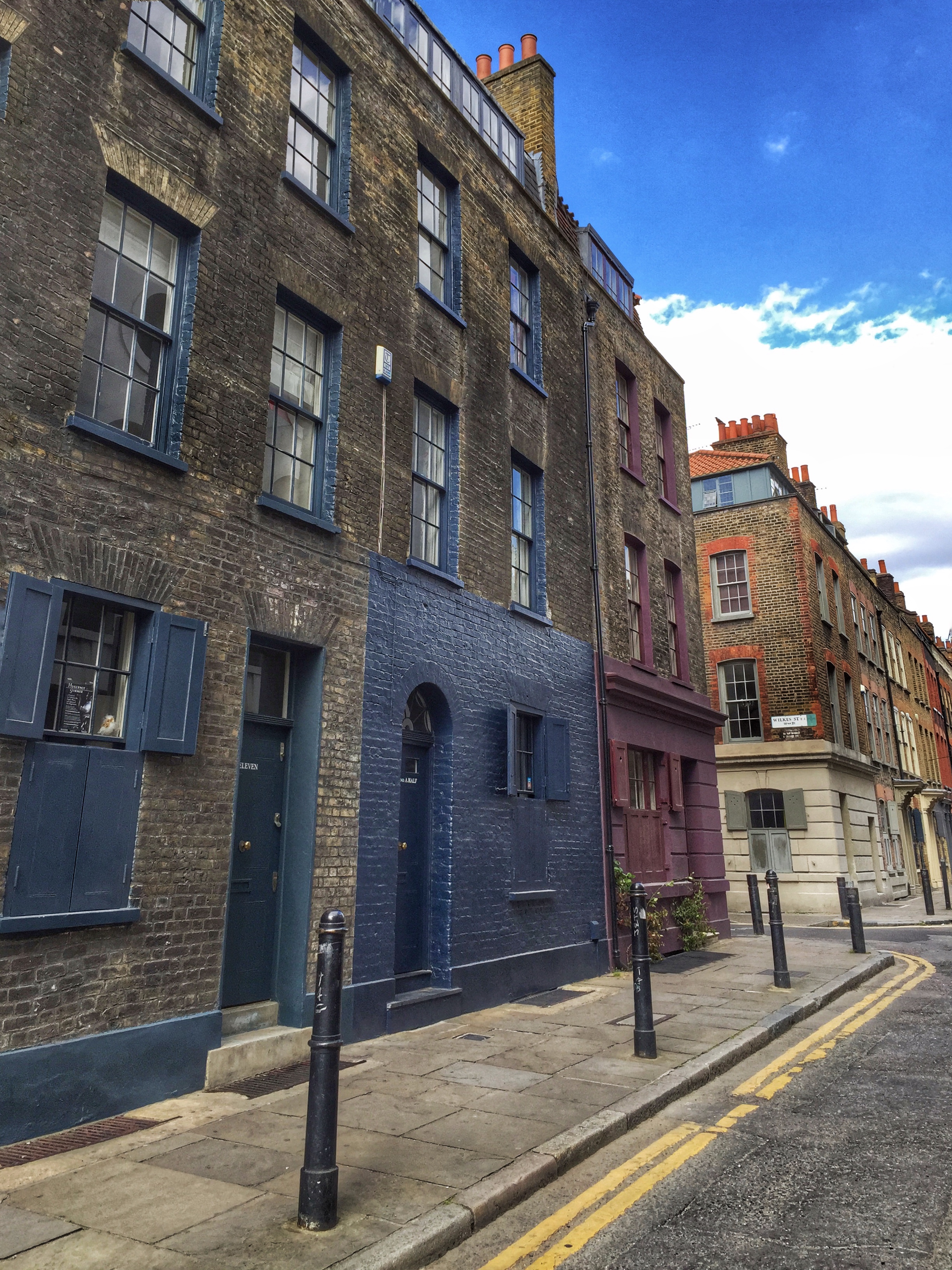 The pretty terraced townhouses on Fournier Street in Spitalfields

Can I tell you how much I love Townhouse located at 5 Fournier Street?  It is a charming mix of many things, all of them done well.

Townhouse is ideally located on Fournier Street which runs across from one of the entrances to Spitalfields Market.  Located across from Christ Church, it is one of the Huguenot houses that has been lovingly restored.  By the way Christ Church is a massive Anglican church built in the early 18th century to impress the nearby Huguenots.  Although Protestants were welcome in England, the Huguenots had better remember the Church of England was the dominant religion. 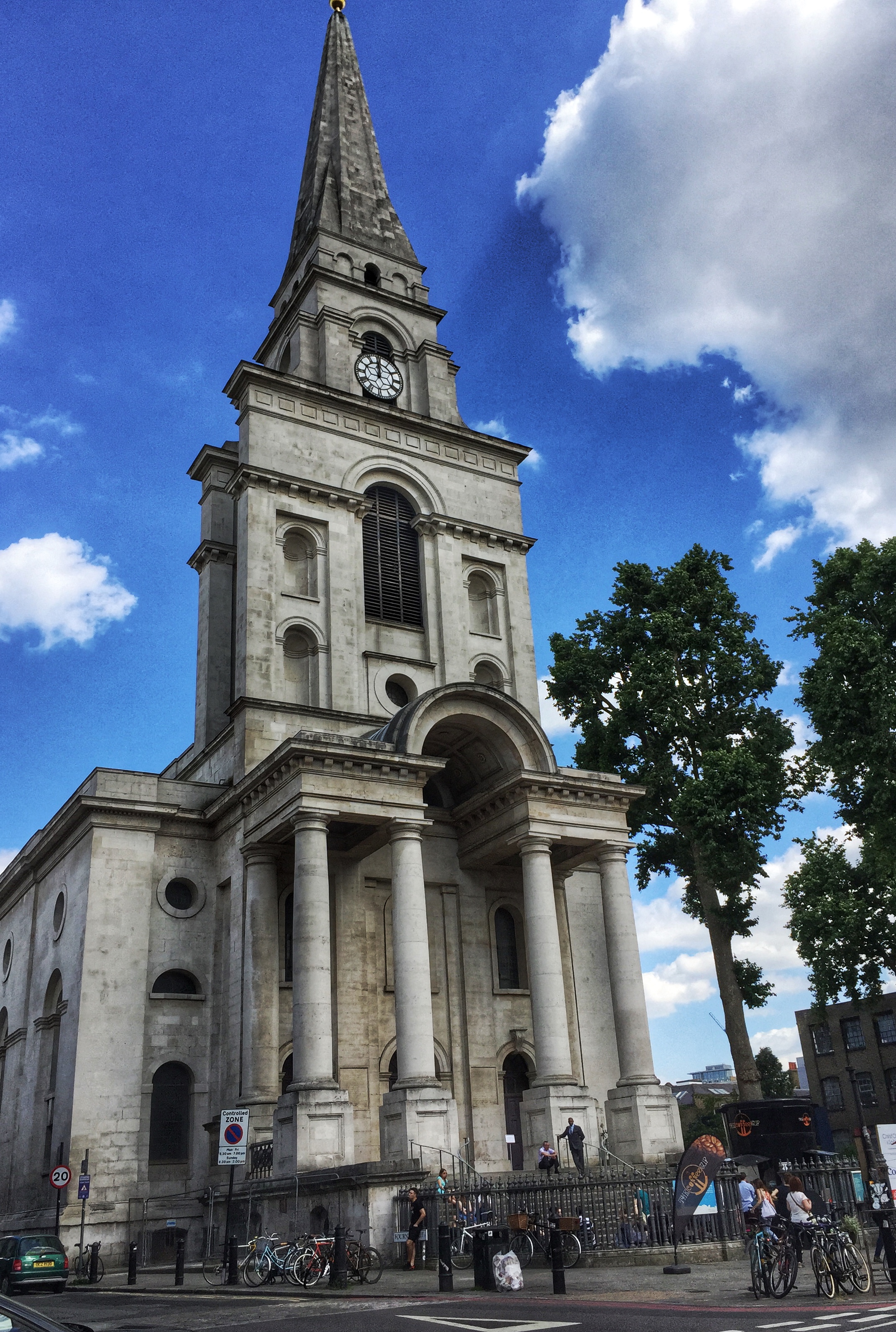 The history of Townhouse is reflects the story of the local area.  Huguenot weavers lived in the house.  Then it was occupied by doctors who used the rear gallery room as their surgery.  It has also been the home of a Russian translator, and a furrier who I would bet were part of the Jewish immigrant population in the area.

The present owner (Fiona) bought the house as wreck 10 years ago.  Believe it or not, the house didn’t have plumbing or electricity at the time!  It has been lovingly restored to its original beauty.

Anyway, back to what you can expect at Townhouse, itself.

You enter on a raised ground floor which is an antiques store.  Fiona’s parents were antiques dealers as well and you can tell she has a good eye.

Exit through the back onto a small patio garden leading onto another room which is an occasional gallery.  Where to start in this treasure trove?  We really liked the detailed map of the area by Adam Dant which shows hundreds of the names and addresses of the Huguenot settlers in the area.  Signed copies are for sale if you are interested. 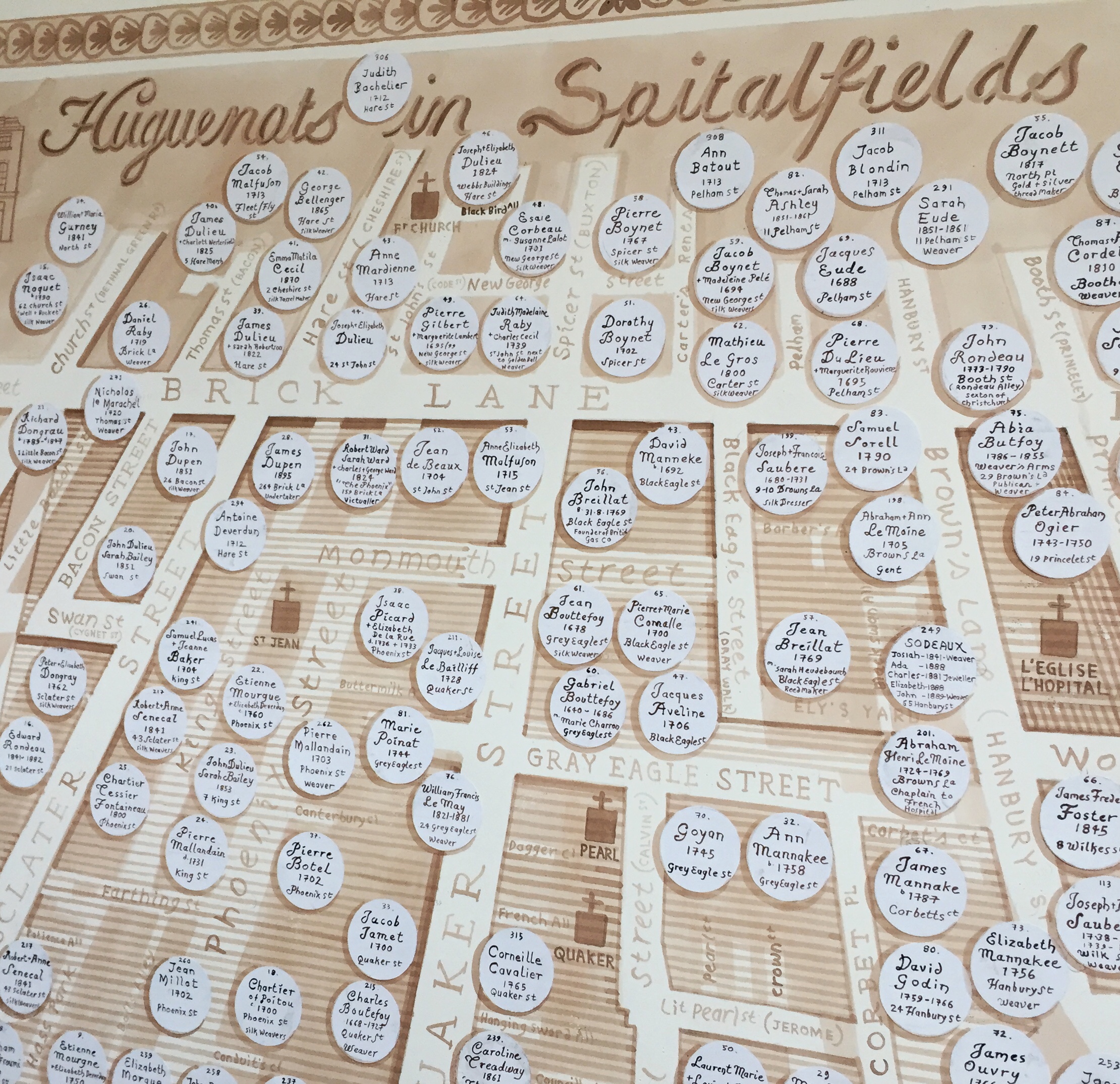 Then there are the Living Sections artworks by Ben Rea, artist and architect, who shows these old houses as they would have been used in former times.  He researches each house and then draws it as cross-section with its inhabitants going about their lives inside.  Underneath some of the houses, you even get a part where the London Tube exists.  There is so much detail in each room that you get a sense of how vibrant (and crowded) these houses would have been.  Fiona has commissioned a piece that shows Townhouse itself.

Downstairs in Townhouse there is a kitchen with the most scrumptious cakes and coffee.  Fiona makes the lemon drizzle cake which I can vouch for as truly delicious. Some of the baked goods are from The Luminary Bakery on nearby Brick Lane.  The Luminary Bakery is a place where women who have troubled backgrounds (e.g, drug or domestic abuse) can learn to bake in order to get them into employment. 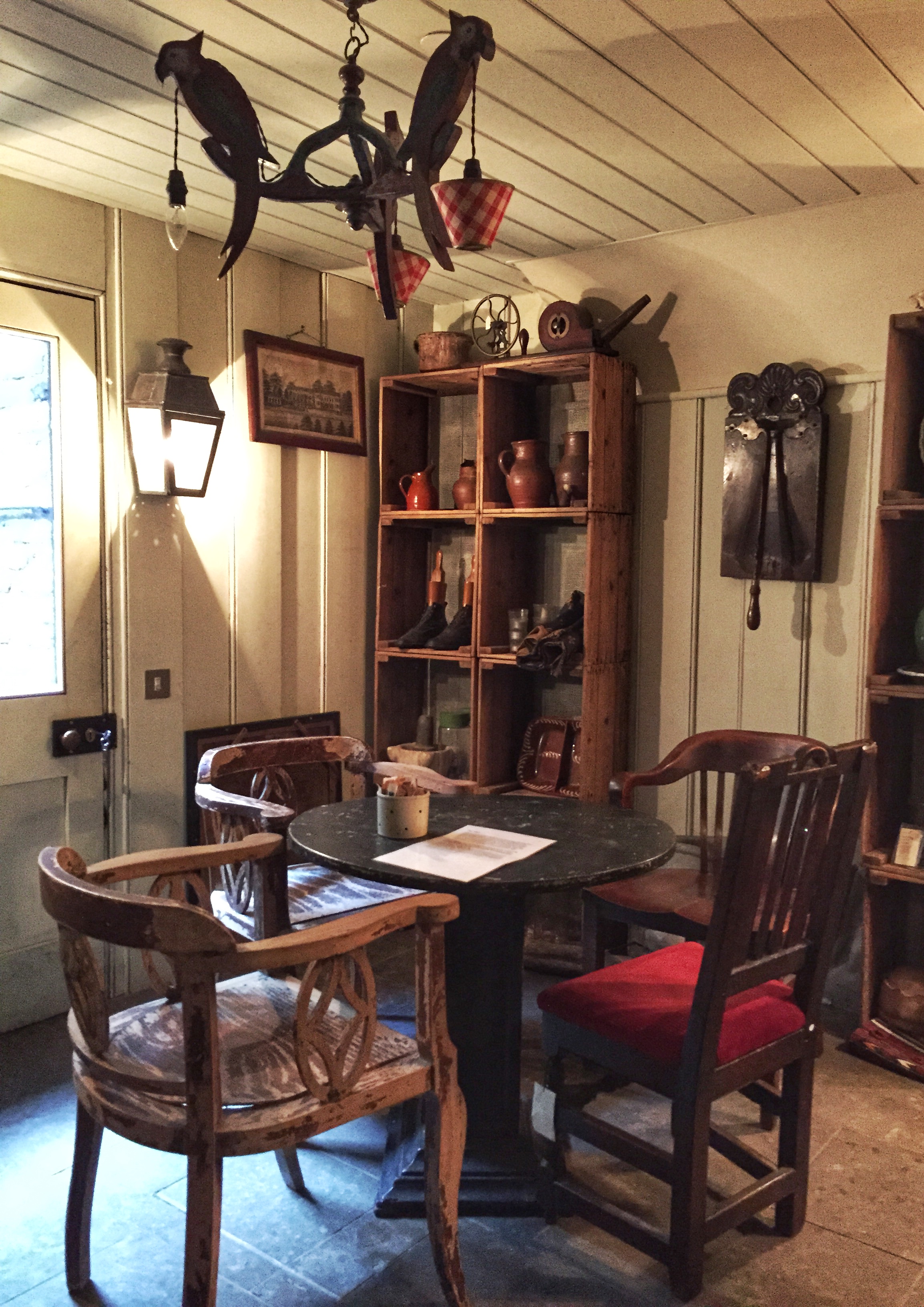 Doesn’t it feel like you are sitting in someone’s parlour?

An array of locally-made goodies

Townhouse doesn’t end there! There is a two bedroom flat for rent (minimum 3 day rental) above the store restored with the same care as the rest of the townhouse.  The prices are reasonable in my opinion (£625 for a 3 night stay over the weekend).  As with all of these houses, there are a lot of stairs to climb. You are really close to Liverpool Street Station (one of the main stations in London) as well as the City of London.  Children under the age of 12 are not allowed.

Townhouse is located at 5 Fournier Street in Spitalfields, London E1 6QE.  The rental portion of the house has its own website, Stay in Spitalfields.