Everyone loves the city of Barcelona. I mean what’s not to love? This cosmopolitan city is the most visited in Spain thanks to its fabulous architecture, food, wine, weather, etc. There is so much to do outside of the city of Barcelona though that it would be a shame not to explore the environs of this city. For example, my kids thought the beach at Barcelona was fantastic until we were truly wowed by the beaches along the coast.

The Best Day Trips From Barcelona

Barcelona has a lot to occupy a visitor but it does get crowded in the summer.  I was told that the typical tourist route from one of the ginormous cruise ships involves a visit to La Boqueria, the food market, a stroll on Las Ramblas and a visit to La Familia Sagrada.  When I visited Barcelona with my children once during the peak season, we felt overwhelmed by the number of tourists in the Barrio Gotico.

With that in mind, here are five places outside of Barcelona that are easy to reach but will take you away from the crowds that can congest the city. All of these day trips are an hour or less from Barcelona so that you don’t need to get up at the crack of dawn to reach them either.

The mountain of Montserrat is steeped in legend dating back to Roman times when it was the location for a temple to Venus. In later times, the Nazis thought Montserrat could be the location for the Holy Grail. Nowadays, Montserrat houses the basilica of Santa Maria de Montserrat which many of the Catholic faithful visit for the Black Madonna icon. Be warned, the lines are as long as at Lourdes. There is also a world-famous children’s choir, a small art gallery and a Benedictine monastery. 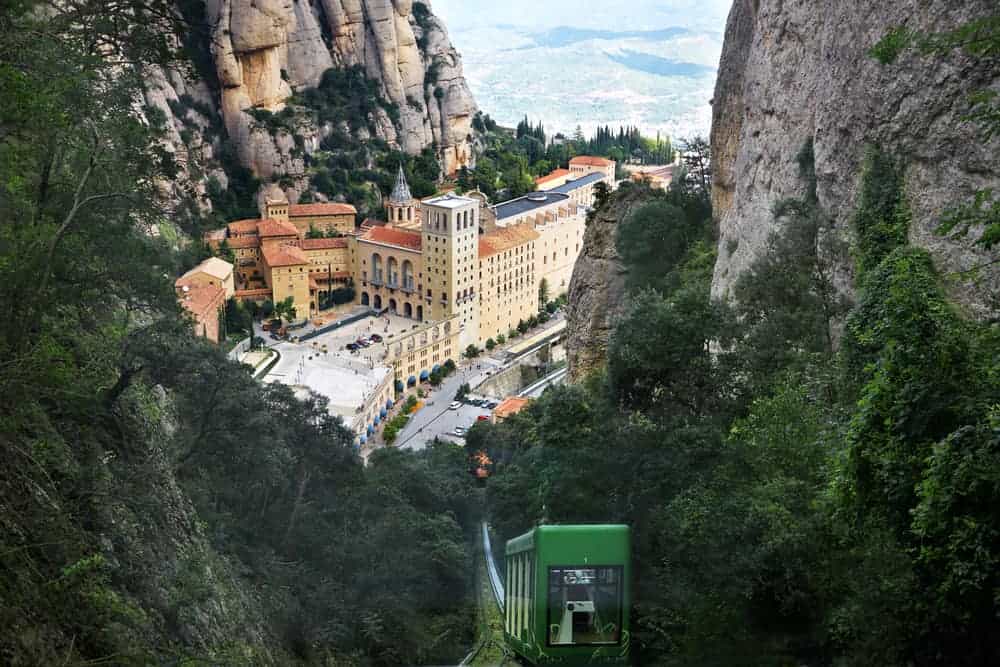 Montserrat is a one hour train ride from Plaza Espanya in Barcelona followed by either a cable car or a funicular to the top of the mountain.

Antoni Gaudi’s next-to-last work is the Crypt at Colonia Guell, created at the behest of his life-long patron, Eusebi Guell, for whom he undertaken many projects such as Parc Guell and Casa Guell. The relatively simple altar is similar to that at La Sagrada

The crypt was supposed to be the base of the larger church which Gaudi never finished because the Guell family changed their minds. The crypt at Colonia Guell lets you peek inside Gaudi’s thought process when he was working on ideas for the Sagrada Familia.

Colonia Guell is 20 minutes by train from Plaza Espanya in Barcelona.

The Museum of Contemporary Art in Mataro is small but well worth a visit if you are a fan of Antoni Gaudi. The art is housed in the first building built by Gaudi – a cotton bleaching factory commissioned by a local textile cooperative.

You can see where Gaudi first used parabolic arches to give height and space to a structure. The building is beautiful even though it was meant for mere industrial purposes. During the summer months, the museum holds family activities in the evenings.

After all that cultural edification, you may want to check out the beach at Mataro which is wide, sandy and well-regarded by locals. sailing off the coast of costa Barcelona

The Drunk Monk is a famous cerveceria in Mataro which servers over 250 types of beers. With a 5 star review from beer-lovers guide, ratebeer.com, this bar is located about half a mile from the Museum of Contemporary Art.  Take note, it’s beers, beers and more beers. No wines, ma’am.

You can get to Mataro in 40 minutes by train from Barcelona’s Plaza Catalunya.

Can Rosa is a small family-owned organic vineyard in the outskirts of Barcelona built in the late 19th century by a wealthy industrialist. The house has been preserved in all of the splendour of the period when even King Alfonso XIII visited the vineyard. It’s a perfect peek into the life of what would have been the Spanish equivalent of the robber baron industrialists in the USA. The spacious veranda overlooking the vineyards at Can Rosa

The vineyard is operated as a labor of love by a local family who produce 28,000 bottles of wine in 7-8 classes. They bought it from the original family who built the house complete with all the furnishings.

The wine falls in the category of Allela D.O. which is the smallest wine producing region in Spain. The house and the vineyard are charming. Can Rosa can arrange for wine tastings in an idyllic setting

Not surprisingly, they have about 30 weddings a year at the location. The owners can prepare a picnic for you in the courtyard or in the vineyards for a fairly idyllic way to laze away an afternoon in the sunshine. Having a prime picnic spot is after all one of the essentials for a great picnic!

Can Rosa is located 10 minutes by train from Passeig de Gracia in Barcelona to Molet. From the town of Molet, a bus runs half-hourly up to the vineyard.

The slogan for Casteldefells is “the best beach close to you” which is meant to lure the city folks from Barcelona to Casteldefells admittedly glorious wide sandy beach.  The town is also home to lots of footballers who have their large houses in the hills above the beach. With all this footfall, Casteldefells has 500 restaurants! A wide sandy and clean beach at Casteldefells

The Casanova Beach Club is a popular spot for the young and trendy, including footballers. Children under the age of 14 are allowed to eat at the club (which has great food) but not use the pool. The pool has loungers etc and seems a great way to spend the day.  The no-kids-under-14 rule would so not sit well with my children though.

If you would like a spot of sightseeing, the castle at Casteldefells looms over the city. The castle started out as a church in the 10th century before it was fortified in the 12th century. In the 19th century, a wealthy local banker bought the castle and renovated it as a party pad for people he wanted to impress.

Check out the Olympic Cable Park canal built for the 1992 Barcelona Olympics. You have an array of water sports activities ranging from kayaking, water skiing and wake boarding as well as land activities such as archery and a children’s playground. Archery at the Olympic Park

In the Garaf Nature reserve which envelops Casteldefells, there is plenty of family-friendly hiking and biking. Housed in the former home of another wealthy industrialist, the Sakya Tashi Ling Buddhist monastery is located in the Garaf Nature Park. It offers guided tours, a restaurant and a store, all devoted to educating about Tibetan Buddhism.

Casteldefells is 25 minutes by train from Passeig de Gracia in Barcelona. There are two train stations for Casteldefells – one that stops in the town and one for the beach itself.

I have chosen these day tours from Barcelona to give the visitor a sense of context for Barcelona. The city, larger than life, sits as an important hub for the surrounding area. The history and people of these areas are intertwined with that of the Barcelona itself.

We stayed by the seaside in Barcelona at the 5 star Hotel Arts. This famous hotel is justifiably lauded – the service is great, the location convenient and the views fantastic.

On previous trips we have stayed at the 4 star Hotel Royal Ramblas located conveniently on the Ramblas. My children really enjoyed the lounge with its huge windows where you can watch all the action on Las Ramblas.

We have also stayed at the Grand Hotel Central, a 5 star hotel, with an incredibly convenient location. The hotel is a 5 minute walk from the Barcelona Cathedral, sandwiched between the Gothic Quarter and the trendy Born District and an easy walk to the beach.

Accommodation outside of Barcelona

You could choose to stay outside of the city centre of Barcelona and do a reverse commute into the city for when you choose. The hotels outside of Barcelona tend to be more spacious, family-friendly and cheaper than central Barcelona hotels. A great pool, location by the beach and connecting rooms at the Masd Mediteraneo – perfect for a family-friendly holiday

In Casteldefells, the 4 star Masd Meditteraneo Hotel Apartmentos is located right on the beach. It has a pool as well as adjoining rooms which can be configured to suit families.

Similarly, the 4 star Hotel Atenea Port Mataro is located in the harbour and beach area of the town and is very family-friendly.

SPREAD THE WORD! PIN THIS TO YOUR TRAVEL PINTEREST BOARDS FOR FUTURE REFERENCE! SaveSave Montserrat, Costa Brava, and a few more ideas for things to do in Barcelona and
around: discover the best day trips from Barcelona, Spain. These Barcelona day are
absolutely kid-friendly and a lot of fun! #barcelona #costabrava #montserrat
#spain #daytrips When you visit Barcelona, it’s tempting to stay in the city all the time: it’s such a cool city! But
its surrounding area is also pretty special: check out the 5 best day trips from Barcelona,
which inlcude famous places like Montserrat and less famous ones like Castelfidells. These
Barcelona day trips are absolutely kid-friendly and a lot of fun! #barcelona #barcelona
#costabrava #montserrat #spain #daytrips #casteldefells