The nearly-full moon lent its glow to the oversized metal gates and the front garden path to Caraca monastery at the Caraca Nature Reserve in Brasil.  The gardens themselves were dark, the shrubs creating shapeless forms and safety for the scurrying of little creatures.  The mountain night air was crisp providing a welcome respite from the heat of the day.  In front of the monastery doors, a tray of fruit and meat was placed as an offering to the Special Guest of the evening, the maned wolf (guara).  Like any modern-day celebrity, the maned wolf could be a diva and refuse to perform on stage even though the spectators had paid and were waiting patiently.  There were thirty of us sitting in chairs and on steps around the monastery gates eagerly anticipating the wolf from 7pm onwards. The gated entrance to the monastery

We all waited patiently at the beginning.  The first to get restless were the children.  I sent mine off to bed at 9pm.

I was reading a fantastic book – The Traitor’s Wife by Kathleen Kent about the executioner of King Charles I of England who finds himself in Puritan New England when the monarchy is restored to Charles II.

I was happy, therefore, to wait out the wolf. Waiting for the elusive maned wolf

In fact, I was the last person to leave the patio at 12:30 in the morning having decided that I really should get to sleep.

Briefly I wondered if I was just listening to an audio recording of a wolf howl played by the priests just to keep visitors believing in the myth of the Maned Wolf who would eat in front of you. I hear the next morning that the priests at the monastery had found all the food gone.  I decide that I would give the Catholic priests the benefit of the doubt that they wouldn’t cook up such a scam to increase tourist numbers.

Other visitors I spoke to who had been at the reserve for a couple of days said they hadn’t seen the wolf either.  So, who knows?  Moral of the story:  Don’t expect to see the maned wolf.

Caraca Nature Reserve is located on the outskirts of the little town of Santa Barbara in the interior state of Minas Gerais about 120 kilometres from the state capitol of Belo Horizante. Belo Horizante itself is a one hour flight from Rio de Janeiro or approximately 8 hours by car. Caraca receives its name from the mountain behind the monastery which looks like the profile of a Bishop’s face complete with mitre.

Caraca was founded in 1774 by a Portuguese monk.  He couldn’t convince enough other monks though to join him in his little venture in the back of beyond.  He left his property to the Portuguese Crown who gave it to other missionaries.  In 1820, these monks created a school and a seminary which became very popular and prestigious. The sanctuary buildings seen from a distance Portions of the burned out shell of the monastery It’s easy to imagine how beautiful the whole place would have been.

Remnants of the old monastic life are today still in existence.  There is a hill which is a replica of Calvary (complete with three crosses), a massive church, cloisters and halls of residence for the monks and students. The Monastery’s large church shows how many people would have been to Mass during its heyday.

The Pousada at Caraca

The Pousada at Caraca very much reminds you of the monastery it used to be.  The rooms are simply furnished.  You have a choice of a double bed or single beds to make a double, triple or quadruple.  There are crosses and religious paraphernalia everywhere. The head of the monastery, an older priest in a polo shirt and chinos, introduced himself to us.  He said so far this year 22 different nationalities had visited his monastery.

We saw him regularly shuffling through the corridors of the monastery.  I did wonder at his baleful expression – if he was remembering the days of yore when the premises were full of robed monks who would pray and study instead of earnest hikers in shorts and sneakers gulping from water bottles.

The only place with WiFi in the Pousada is the cloisters.  It was quite amusing seeing people twist, turn and balance to get a glimmer of WiFi for their electronics.  In the end, I just gave up on WiFi. You are very isolated from the rest of the world at the monastery.  This isolation is part of its charm.  You really are a world away.  On the other hand, the isolation did lead to half the monastery burning down before local fire trucks could arrive for the rescue.

The Pousada doesn’t discourage Earthly pleasures though.  There is a small store that sells bottles of wine, soda and chocolate milk.  You can also get wine for lunch and dinner.

Lunch and dinner at the Pousada is served in the old Monastery dining room.  The tables are laid out cafeteria style.  In the middle of the room, there is an intricately carved stone lectern.  The walls are lined with portraits of previous priests who reign fire and brimstone through their expressions.  The buffet serves up standard Brasilian fare – there was always black beans, rice and pasta to keep my children happy. Food served in keeping with a simple monastic style

The breakfast was served in a smaller cafeteria.  My children loved breakfast because they could make their own pancakes and eggs.  The ingredients are laid out on the buffet and you are expected to cook over the stone hearth with an open fire underneath.

The Nature Reserve consists of about 30,000 acres of grassy fields and forest surrounded by mountains.  The reserve is home to 386 species of birds, 42 species of reptiles, 12 species of fish and 76 species of mammals. There are numerous trails of various difficulty.  The trails are well-marked and each is assigned a difficulty. Easy trails (classified us up to 2 kilometres) will take you to a small beach, waterfalls and lookouts over the valley.  We did some of these trails with our children and they were indeed easy. Hiking through the Caraca Nature Reserve

Our favourite path lead to a small (for Brasil) waterfall. The waterfall was tiered over 4 stages and about 130 feet tall.  At stage 3 which is where the path leads you, you can enter the waterfall.  The mountain water was crisp, cold and a joy to enter on a hot day.  The water retains a reddish brown hue because of the minerals in the soil. The easy hiking paths were wide and fairly flat and occasionally even shaded from the heat of the sun by trees.  You could hear the chirping of birds everywhere which is pretty standard for Brasil.  As you walk, you will notice lizards scampering around rocks and butterflies fluttering amongst the flowers.  It feels a million miles away from the crowded beaches of Rio. 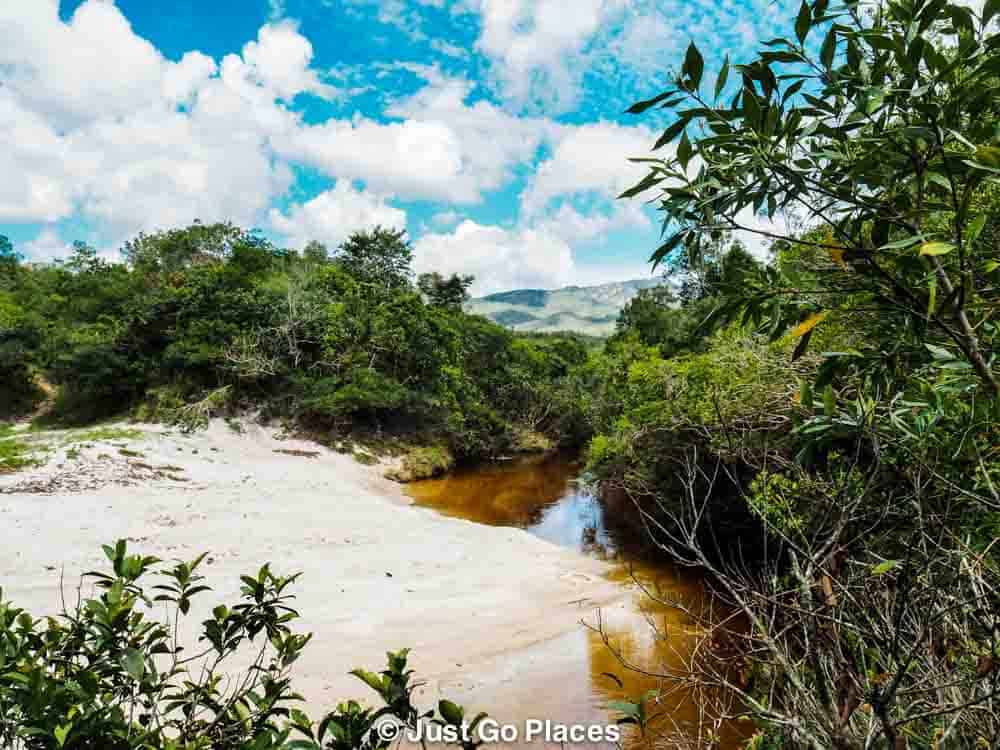 We spotted lots of little lizards

Other trails, marked as long distances (2-6 kilometres), are more challenging.  For trails that are above 6 kilometres you are required to hire a registered guide to escort you. It is suggested that you stay 2 days at the Caraca Nature Reserve so you can do a few of the different walks.  We did meet plenty of people though who were staying longer.  I think the lack of WiFi would’ve sent  me over the edge though.

We were told last year that 17,000 people visited the nature reserve.  Many Brasilian people come just for a weekend with nature.  We met lots of Brasilian visitors, some French and a couple of Americans.  My husband was surprised that there weren’t more people from the United Kingdom (even paging through the visitor books for past guests).

The nature reserve’s website is in English if you would like to learn more about this off the beaten path experience in Brasil.  I would highly-recommend it. What if I told you that Caraca Natural Reserve in Brazil might be Brazil’s best hidden gem?
You might not even ever heard of it, yet this nature reserve is pretty extraordinary. Still off
the beaten path, it’s located 120 km away from Belo Horizonte. You won’t find just beautiful
landscapes, waterfalls and all kinds of animals: check out why you should visit the Caraca
Nature Reserve! #brazil #braziltravel #caraca #belohorizonte #offthebeatenpath