The History of St. Patrick’s Cathedral in Dublin

Saint Patrick, patron saint of Ireland, was said to have baptised the local Celts in a well that stood in the park next to the Cathedral. Thanks to its association with St. Patrick, a church has stood on this location since the 5th century.  The church got upgraded to Cathedral status in 1191.  The Cathedral has been rebuilt and extended many times over the years. A lone minister heads out after services.

The Archbishop of Dublin has his seat at the other Church of Ireland cathedral in Dublin, Christ Church.  Since 1870, St. Patrick’s Cathedral has been designated the National Cathedral because, after all, how many Anglican cathedrals does one predominantly Catholic city need. A fairly simple altar, you know the Catholic version would have been much more ornate.

The cathedral is the largest church in Ireland.  The spire, an addition from the 18th century, soars 140 feet into the sky and is a local landmark.

I absolutely loved the stained glass and the mosaic floors. There are a lot of Anglo-British paraphernalia around which attests to the time that Ireland was controlled by the British. The stained glass is mostly Victorian.

Jonathan Swift, who became famous for writing Gulliver’s Travels, was a Dean of the cathedral from 1713-45.  Along with over 500 other people, Jonathan Swift and his ‘special friend’ Stella are buried in the Cathedral.

The famous oratorio by Handel, Messiah, was first sung at St. Patrick’s Cathedral by its famous choir.  It took about a year for Messiah to have its London debut. Oliver Cromwell on a visit to check out the Irish part of his protectorate in 1649 stabled his army’s horses in the Cathedral. He had no patience for the Church of Ireland which he would have thought was as bad as the Church of England (and a mere papal breadth away from  the horror that was Catholicism). On the positive side, Oliver Cromwell did help spread Irish culture far and wide with his intolerance of Irish Catholics. A bell commemorating the arrival of the French Huguenots.

The Cathedral has a lot of burial plaques which are cool to read and to examine.  Lots of these families went to town decorating their tombs because it was considered quite prestigious to be buried in the Cathedral. Even the statues are dressed to the nines. 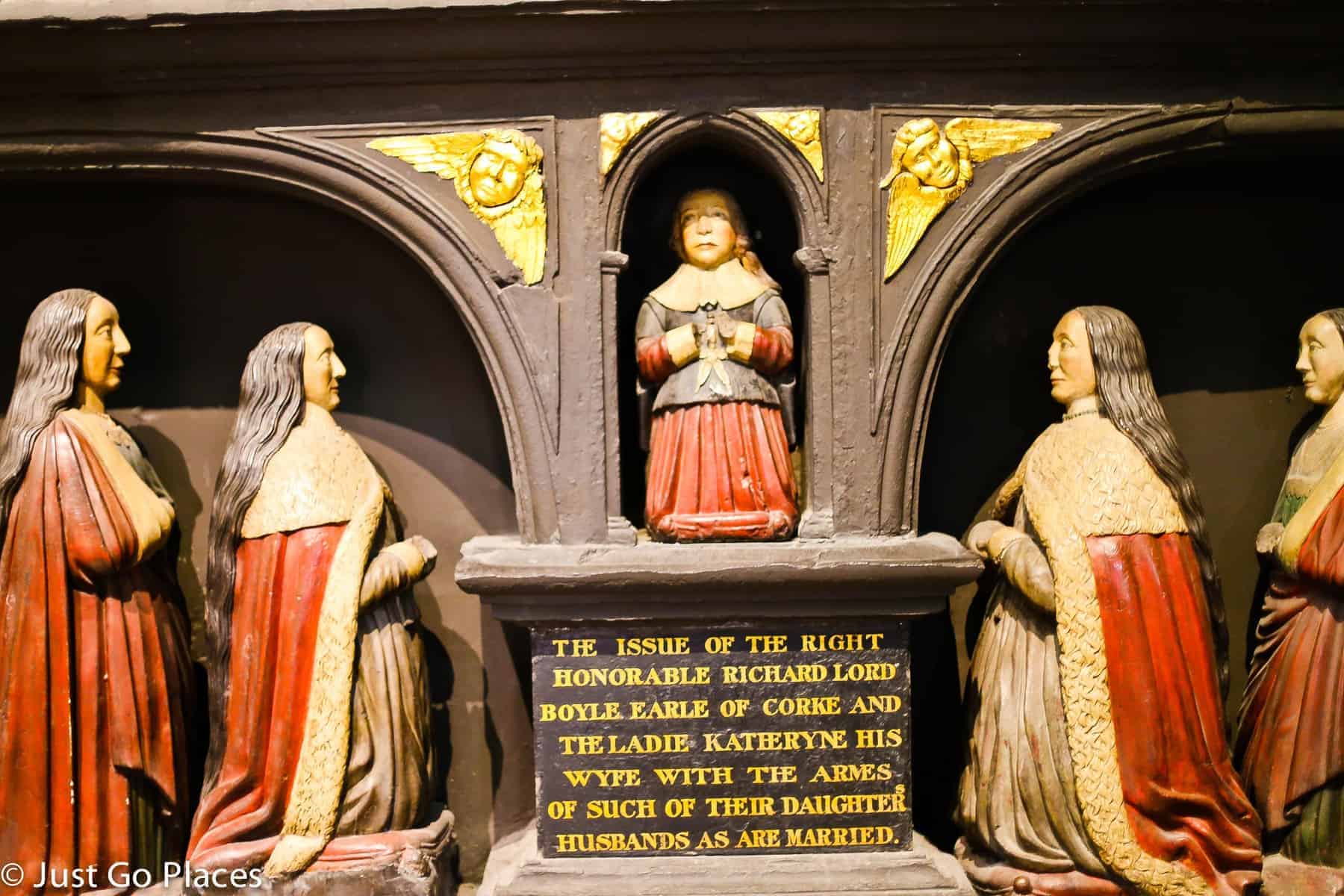 This is a detail of a plaque to the Boyle family the rest of which extends to nearly the ceiling. Ostentatious moi?

St. Patrick’s Cathedral is open 7 days a week and there’s a small admission fee for tourists.  You can just attend a service and skip the fee.  There are no photos allowed, though, during services or when the choir is singing.

There’s a gift shop right by the entrance with all the religious paraphernalia that you may ever wish to buy.  The Cathedral is set in a grassy parkland and there is a small children’s play area as well.  It’s one of the top visitor attractions in Dublin and definitely worth  a short stroll around to understand the turbulent history of this capital city.