As one of the oldest and most beautiful castles in Netherlands, Muiderslot Castle is a must-see during your visit to Amsterdam. With its elegant medieval rooms, Renaissance-inspired gardens and family-friendly activities, Castle Muiderslot takes you to a bygone era and one of the most beautiful places in Netherlands. Moreover, Muiderslot Museum has a lot of artefacts including that of famed Dutch poet and author PC Pot from the 15th century.

There are so many things to do when you visit Amsterdam and so many attractions available through the Amsterdam City Card.

Why should you visit Muiderslot Amsterdam? Muiderslot Castle has been beautifully restored.

The Muiderslot Castle was built in 1280 by the Count of Holland, Floris V. Due to its prime location on the Vecht River, the castle was at the center of the busy Utrecht trade route. Traders and merchants who crossed the rive were required to pay a toll to the castle which provided a nice little income.

Muiderslot Castle Netherlands was also meant for defensive purposes – the stone walls are 5 feet thick! Unfortunately, the walls were still no match for the stone cannonballs that were in use by the 15th century. Stone cannonballs that were used to break down the 5 foot thick stone walls.

In 1296 Floris V met a sticky end when he upset his former friends, the English who conspired with Dutch rebels to eliminate him. Floris V was imprisoned in his own castle Muiderslot. Hearing that a group loyal to the Count was on the way, the conspirators fled with Floris.  The story did not have a happy ending since Floris died in the ensuing mayhem and Muiderslot got destroyed, too.

Fun!  Every castle has to a have a ghost story – it’s like an unwritten rule of castle lore. Castle Muiderslot is supposed to be haunted by Floris. It seems unlikely since he didn’t even die in the castle.

The Muiderslot Castle Netherlands was rebuilt again a few years later. In the 1500s, it was bought by author and poet P.C. Hooft (William Shakespeare’s equivalent in Holland), who used the castle for extravagant parties. Amsterdam Castle Muiderslot is furnished at would have been during the time of P.C. Hooft.

In the 18th century, Amsterdam Muiderslot Castle was used as a prison before being completely abandoned and left to crumble.

Once the Kingdom of the Netherlands was established in the early 19th century, neither the Netherlands nor Amsterdam had money to restoreMuiderslot. Saved from demolition by the intervention of the Dutch king, Muiderslot was left to languish forelorn.

Salvation came in 1878 when Muiderslot Castle was renovated and turned into a museum after fundraising efforts in Amsterdam. Moreover, Muiderslot got a facelift to fit romantic notions of what a castle should look like, e.g., taller towers with spires and battlements. 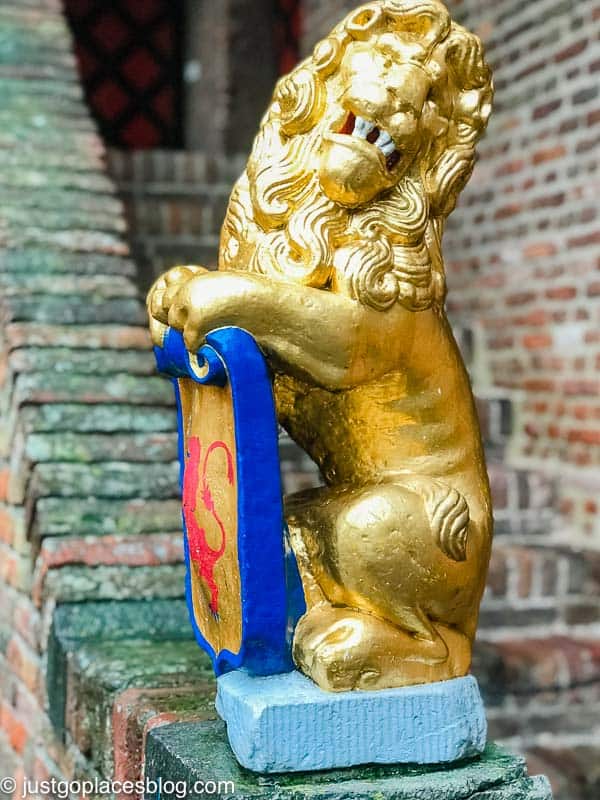 A fairly menacing grin from the lion at Muiderslot Castle Netherlands

One of the Netherlands’ first national museums, Muiderslot was renovated in 1878 by Pierre Cuypers – the architect who also worked on the Rijksmuseum and Amsterdam Central Station.

The first thing you’ll notice upon approaching Castle Muiderslot is the large moat surrounding the building. While the castle itself is relatively small, its impressive brick structure and thick fortified walls make it look larger and more imposing than it is.

In the medieval period, the castle’s impressive moat defended it. During later periods, Muiderslot because the first line of defence of the important city of Amsterdam. It’s easy to see why Amsterdam Muiderslot Castle is considered one of the most beautiful places in Netherlands.

Amsterdam Castle Muiderslot was part of the water-lines which used water as a weapon from 1629 to 1952.  The water line defence of Amsterdam is so unique as to be UNESCO world heritage listed.

What’s a Water Line Defence? When there was an attack on Amsterdam, enough water was released from the city’s canals and dams to make crossing difficult for the enemy by foot or horse but not deep enough for ships to navigate.

On the inside, you’ll find several rooms that have been restored to look exactly as they did in the 17thcentury. Many of these rooms were decorated and styled by P.C. Hooft himself during his 40-year ownership of the castle. Displays of knight’s armor at the Muiderslot Museum

The Muiderslot Museum is divided into two parts – the Middle ages and the 17th century. Here, you’ll find artistic and furniture masterpieces.

For example, the red canopy bed is dated from the early 17th century and impressed people even back in the day. The bed was made from oak which had to be imported since the Dutch had already deforested their own land. At Castle Muiderslot near Amsterdam you can see some original 17th century furnishings used in Holland.

There is also a 14th century chest  made from one hollowed out oak and then reinforced with iron. In those days the lord of the manor carried everything they owned from house to house so chests were very important and needed to be secure.

One of the most extravagant rooms in the castle is the Knight’s Hall. During the Middle Ages, this room was used by the medieval lords for dining and entertaining and the occasional trial for offences committed. In the evening the lord’s knights slept in the Knight’s Hall. In this castle in Netherlands, the Knight’s Room is impressive for its size and furnishings.

In the 17th-century, the Knight’s Hall was where Hooft and his party guests would sit and play music, read poetry, and exchange ideas. Hooft put on his plays in the Knight’s Hall making it one of the oldest theatres in the Netherlands.

P.C. Hooft also commissioned the Renaissance gardens surrounding Muiderslot castle. Besides the manicured lawns, romantic gazebos, and budding flower beds, the castle gardens also have an abundance of fruits, vegetables, and herbs. The garden was protected from the harsh sea air and wind by high hedges and trees. The beech tree tunnel was created to separate the herb garden from the vegetable garden. But also for fashionable 17th century women and their pale skin from the sun while enjoying the garden.

One side of the garden contains a variety of useful plants for herbal, medicinal and dyeing purposes. At the other side is the vegetable garden with all sorts of rare and foreign vegetables, such as artichokes, corn, and tomatoes, which were brought to the Netherlands from Asia and the Americas by Dutch traders.

Fun fact!  Gardens enhanced the owner’s wealth and status in 17th century Holland. After all, land was a scarce commodity in the country.

There’s a free audio tour available in English as well as an activity kit (available for a small fee) for families that visit Muiderslot Castle. Even without my kids as an excuse, I got to play in a jester outfit at the Muiderslot Castle.

Muiderslot  is roughly ten miles away from the center of Amsterdam which makes it an easy day trip for locals and visitors alike.

How to Get to Muiderslot Castle from Amsterdam

The easiest way to get from Muiderslot Castle to Amsterdam is with a 20 minute car journey on the A1 Motorway (exit 3 Muiden/Weesp). Muiderslot has a small parking lot.

Public transportation is also a possible way to reach Muiderslot.

Another option is to cycle from Amsterdam to Muiderslot. This scenic ride takes only an hour and is an excellent option for exploring the rural landscapes of Amsterdam. On our bike-boat tour of the Netherlands, we cycled from Muiderslot to Amsterdam.

Muiderslot Castle tickets can be booked online in advance. Keep in mind that Muiderslot tickets purchased online are only valid for the chosen date and time period and cannot be changed or refunded.

Amsterdam Castle Muiderslot tickets are also free for those with an Amsterdam City card. There are so many things to do in Amsterdam, Amsterdam travel places outisde the city may not occur to you. One of the prettiest castles in the world, Muiderslot Castle is very near Amsterdam Netherlands. You can use the Amsterdam City Card to enter this Amsterdam castle. Easy to get to with Amsterdam transportation, other Netherlands travel destinations will help the tourist congestion in Amsterdam. The Dutch countryside is a must-see in Netherlands and bucketlist Netherlands item.