In honour of the second International Mushy Peas Day, we visited a restaurant well-known for having one of the best fish and chips in London. After all fish chips and mushy peas are a classic British dish. It seems like something you either love or hate, like Marmite. My son loves mushy peas, my husband hates them. I think they just taste like a solid form of split pea soup. You can have traditional mushy peas or use them to jazz up other dishes like a burger or risotto.

So just when you thought they couldn’t come up with any more gratuitous holidays, November 9th is now the International Mushy Pea Day. I’m OK with celebrating food though (even the humble pea). 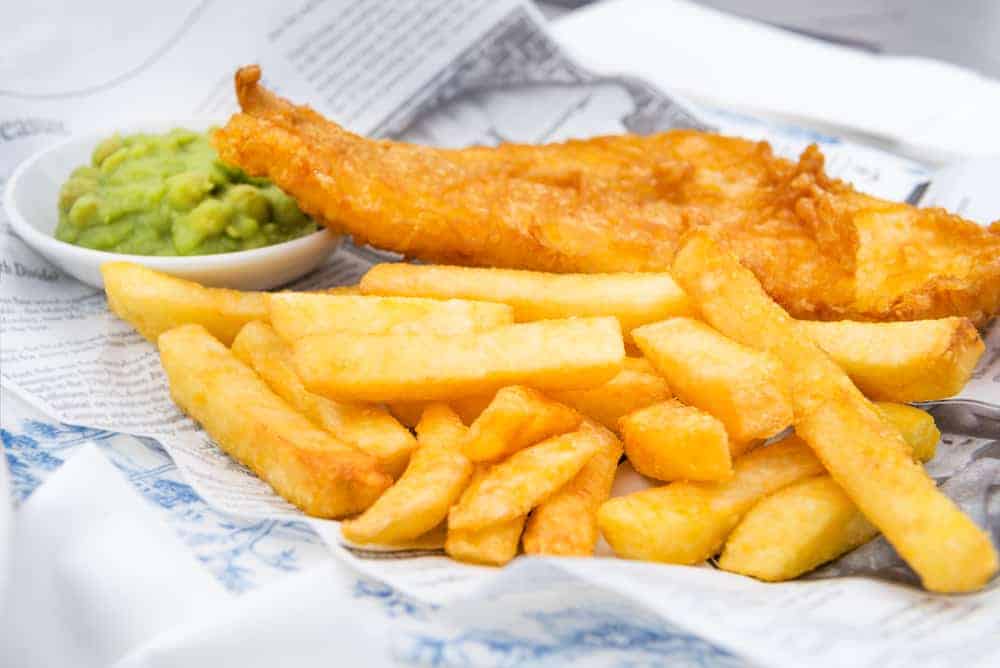 What is Mushy Peas?

First things, first. What is mushy peas? Mushy peas really are just that –  a glob of cooked peas seasoned in salt and sugar mushed together.

Mushy peas are a classic side dish in the North of England. They’ve earned their nickname of being Yorkshire’s caviar by accompanying many a fish and chips or pie meal. It’s the obligatory green vegetable bit that makes you feel better about all the fat and salt in the rest of the meal.

There’s an apocryphal story about Labour politician Peter Mendelson who was trying to shed his city slicker image and be one of the regular folk. Unfortunately, on a trip to Yorkshire he ordered fish and chips with a side of the “avocado dip”.  He has denied the story but the Peter Mandelson avocado story is just too good to disappear. How To Make Mushy Peas A traditional mushy pea recipe calls for dried marrowfat peas to be soaked in baking soda overnight and then simmered in salt and sugar until they form a green mush.  Appetising (to some). Here is the basic traditional recipe for mushy peas.

If you want to go non-traditional, you can use mushy peas to make burgers, risottos and tarts.  I’ve always loved risotto with peas so I am partial to this mushy pea recipe that adds a pea puree to risotto. Why have avocado toast when you can have peas on toast? Here’s a cool variation on the ubiquitous millennial dish.  Can you blame Peter Mandelson for (allegedly) mixing up avocados and mushy peas? Are Mushy Peas Good For You?

Well, it’s not bad. There are about 87 calories per 100 grams. It’s also low in fat but provides proteins and carbohydrates. Other essential nutrients include iron, zinc, potassium and fibre. Go on. Have some mushy peas. Maybe they will be your new avocado substitute.

Best Fish and Chips in London

If you want to try a classic British dish, then fish chips and mushy peas are the way to go.  They are many options for fish and chips in London at many price points. Here are out three favourite options, including the obligatory cheap and greasy joint.

I am not big on deep fried food and/or anything wrapped in newspaper. My pores break out just thinking about it. So you know, the fish and chips have to be good to get a pass from me!

Fish and chips are Friday school lunch classic in British schools. Even my non-fish eating daughter was fine with Fish Finger Fridays (probably because there was hardly any fish in the versions she was served).

Our vote for the best fish and chips in London goes to the Seashell of Lisson Grove located in Marylebone. It’s been around for 50+ years (e.g, supposedly Princess Di would send her driver to Seashell Lisson grovefor takeaway back in the day). There’s a take away and casual dining place on the corner of Lisson Grove as well as a fancier restaurant next door. The Seashell of Lisson Grove menu has an extensive choice of fish.

More Good Options For Fish and Chips in London

My friend went on a quest to find the most ‘authentic’ and best fish and chips in London. His methodology was simple. He asked every cab driver he met. The most recommended was The Fryer’s Delight (19 Theobalds Road, London WC1X 8SL) near Holborn. He loved it – basic, delicious and cheap.  Personally, I thought it was too greasy. How to make mushy peas, both as a traditional side dish and as a fresh take on old favourites Where to go for the best fish & chips in London In honour of the second International Mushy Peas Day, we visited a restaurant well-known
for having one of the best fish and chips in London. Mushy peas go well with fish and chips;
you can have traditional mushy peas or use them to jazz up other dishes like a burger or
risotto. Check out these mushy peas recipes & ideas.