You can’t visit South Africa without delving into its recent past. Well, I guess you could but that would be missing a fairly integral part of what makes the country what it is today. We had explained apartheid to our children but it didn’t really hit home until our guide from Green Apple Tours told us his story. We learned that South Africa did not even have the pretense of a separate but equal policy that the USA tried  before the Civil Rights Era. The District 6 Museum and a chance encounter with a tourist guide brought these truths home to us.

Our guide, Mohammed, was of Cape Malay ancestry with an Indian father and a light-skinned mother who was considered Cape Coloured.  Mohammed was 6 years old when the government decided to make the neighbourhood where they lived (District 6) an area for whites only. 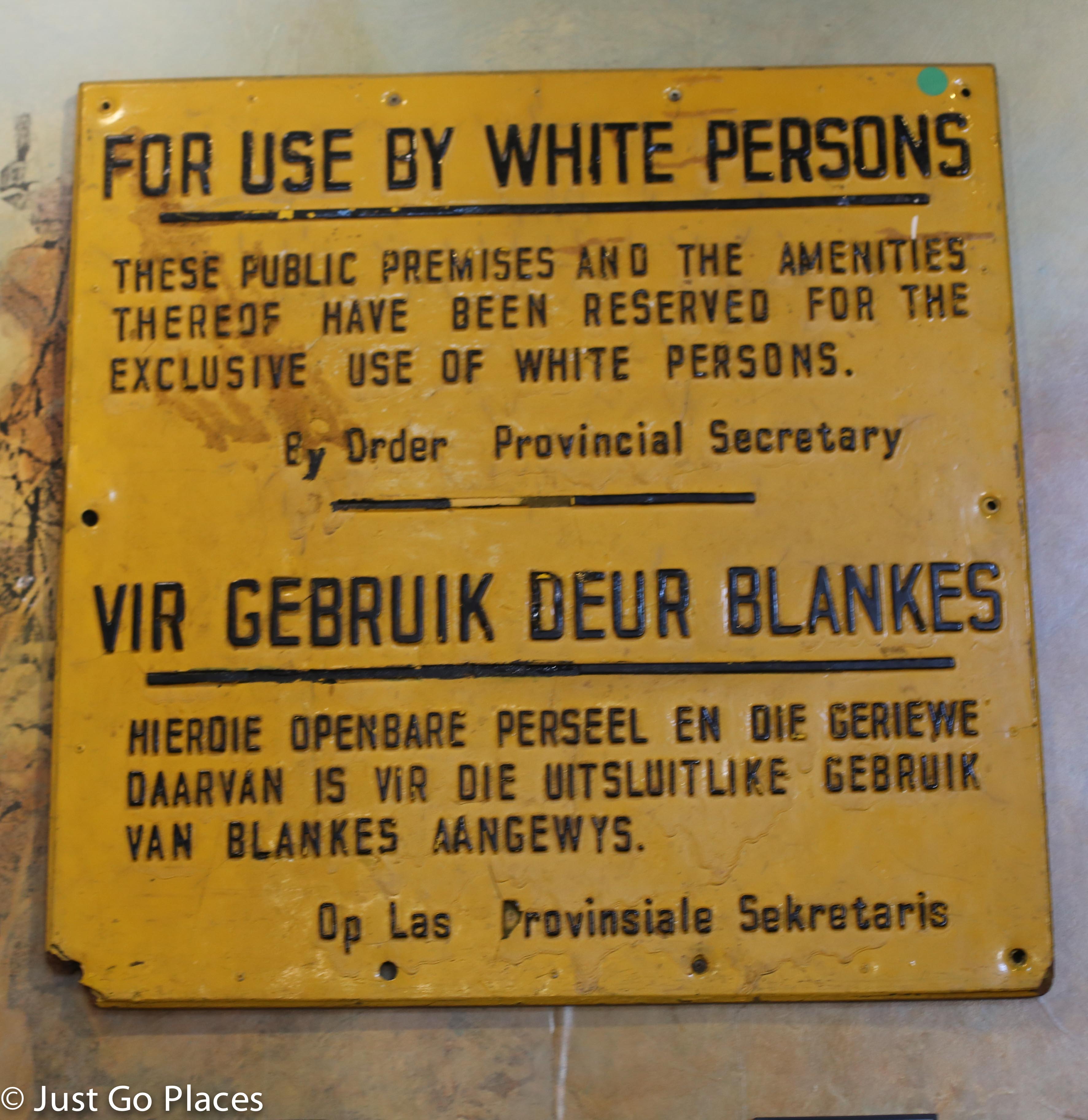 Although the family was relocated to the Cape Flats area, they were divided according to their skin colour. His father was put in an Indian township and the mother and children were put into a separate township for Coloureds, both in Cape Flats.

For Mohammed’s father to come see his family, the father had to apply for special permission to visit the coloured township. The family lived divided for years until the early 1980’s when the Apartheid regime fell apart. You can only imagine how hard maintaining any semblance of a family life must have been during that period. The District 6 Museum commemorates the lives of the people who were forcibly removed from District 6 to townships like this.

Until we visited South Africa we did not fully comprehend how apartheid tore families apart. I had erroneously assumed that there were two classes (whites and everyone else) similar to the American “one drop rule” where everyone who had any African ancestry whatsoever were considered African-American. I had not made allowance for the differences among the non-whites. Everyone was separated into categories – Malay, Indians, Coloreds, Africans and Whites. How did you even separate between shades at that point?

Mohammed’s story hit home with my children especially because I am Indian and my husband is Caucasian. My daughter is light-skinned and would probably have gone with her father if we were living during Apartheid in South Africa. My son and I would go into the Indian camp. Our family wouldn’t be our family any more.

My children also connected to this man’s story because of his personal recounting of it. This sort of racism and attitude prevailed during existing people’s memories. Mohammed’s story became more real to them because he told it to us. They did not learned through a dusty history book about some remote family in ages past.

We also took our children to see the District 6 Museum which explains the stories of many people similarly caught up in events beyond their control.  Although District 6 started off as a mixed area, in 1966 it was declared a whites-only area.  More than 60,000 people were forcibly evacuated to the Cape Flats townships.  The houses in District 6 were razed by bulldozers to prepare the area for white middle class homes. 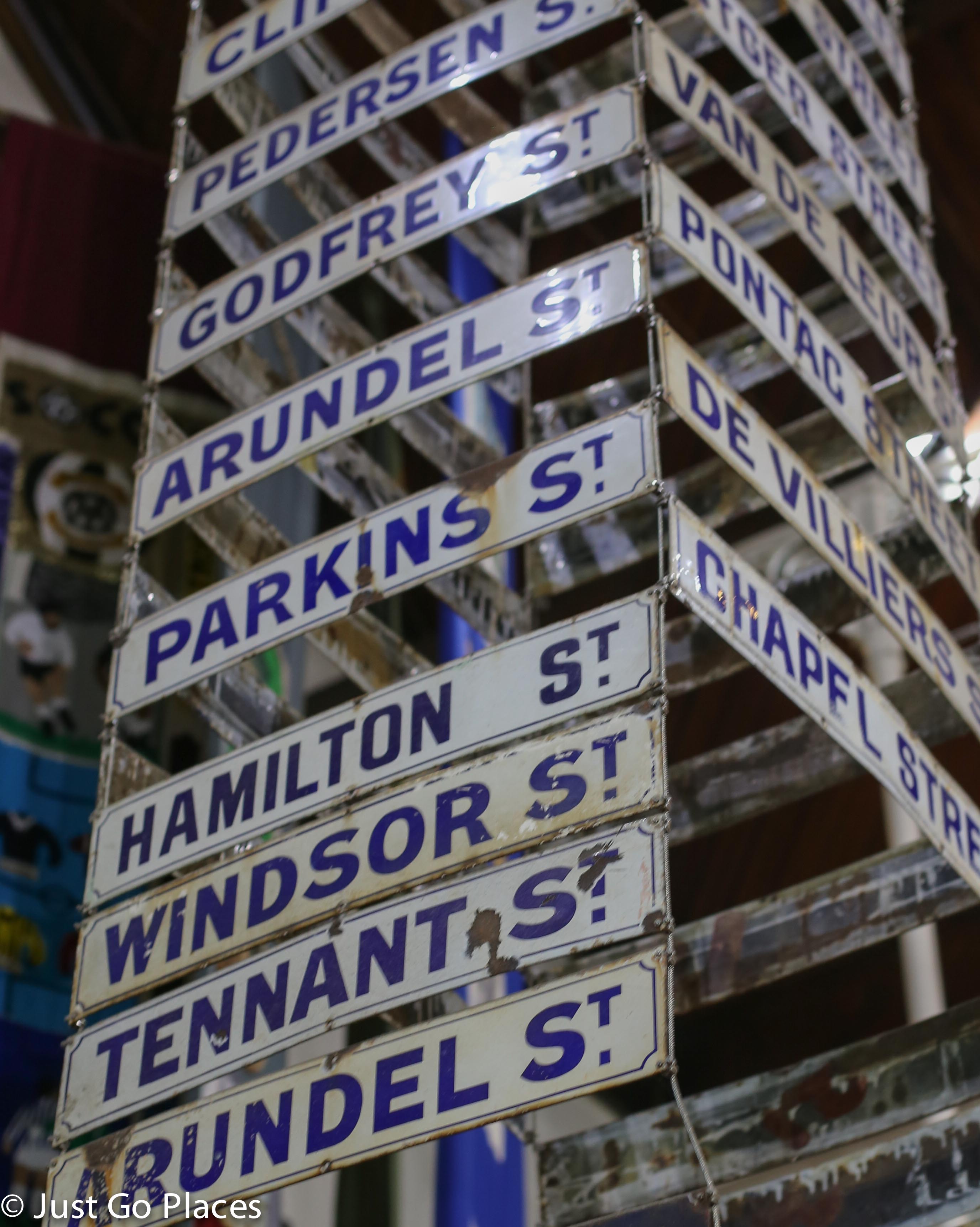 This map shows the streets of District 6 and the names and addresses of the inhabitants prior to forced relocation. 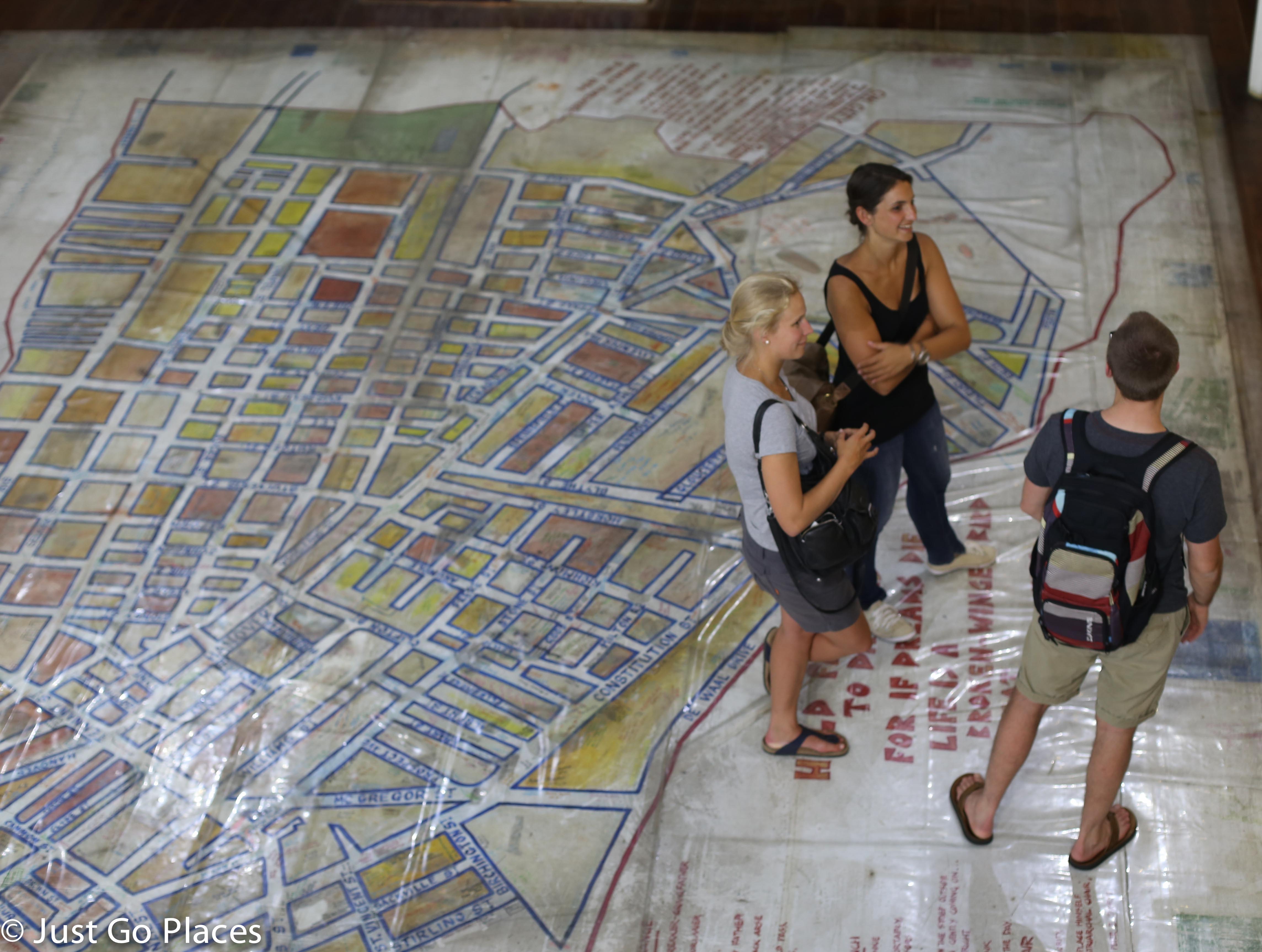 I am struck by the effort it takes to separate people by colour. A lot of time and energy went into planning and maintaining division.

There were separate facilities for everything similar to the American Deep South during the times of segregation. Unlike the Deep South though, there wasn’t even the pretense of having things be separate but equal. 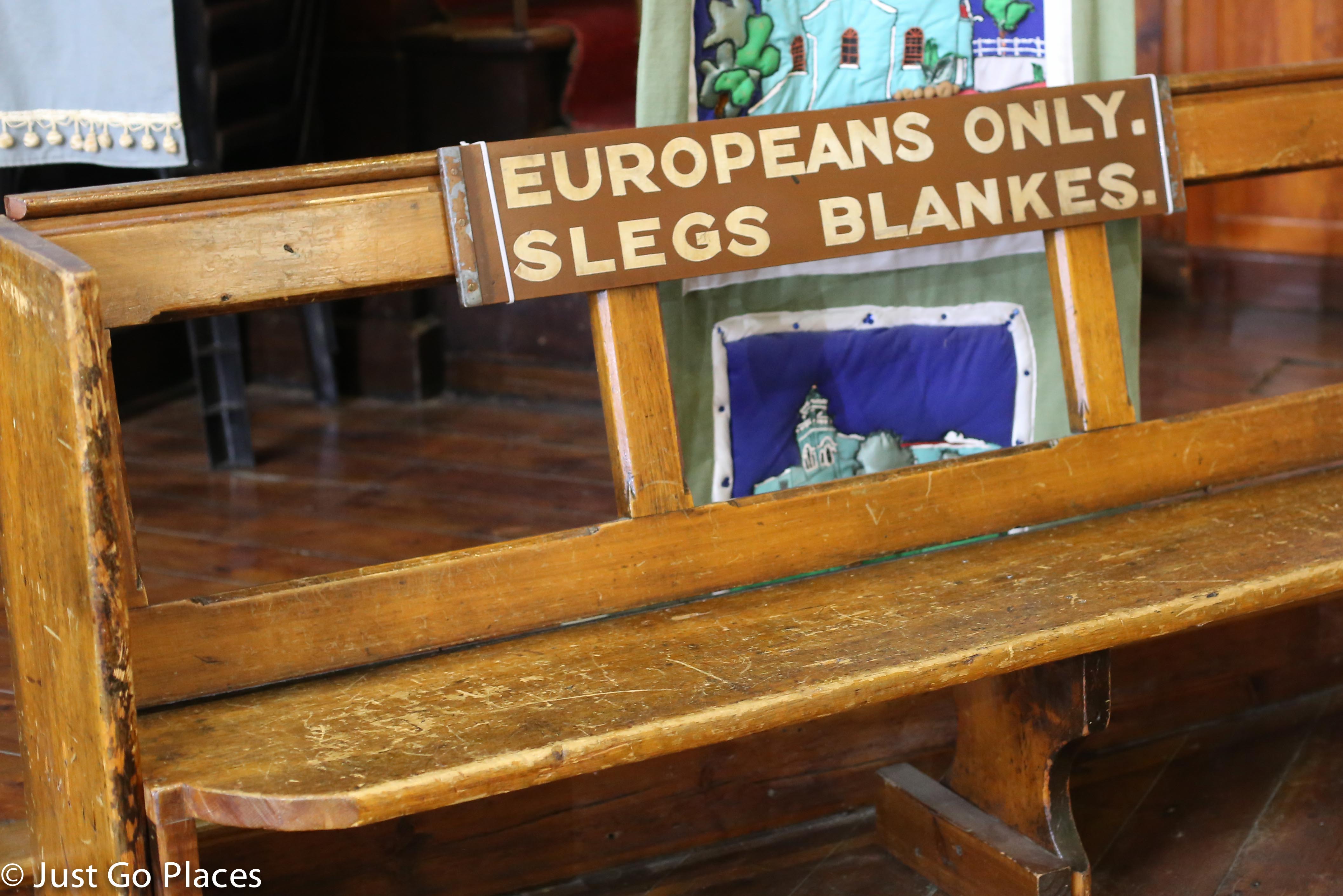 This little house is a reconstruction of a South African author’s township house from memory. Her family of five (parents, 2 siblings) lived in this shack. They had only primitive cooking facilities such as this little burner. 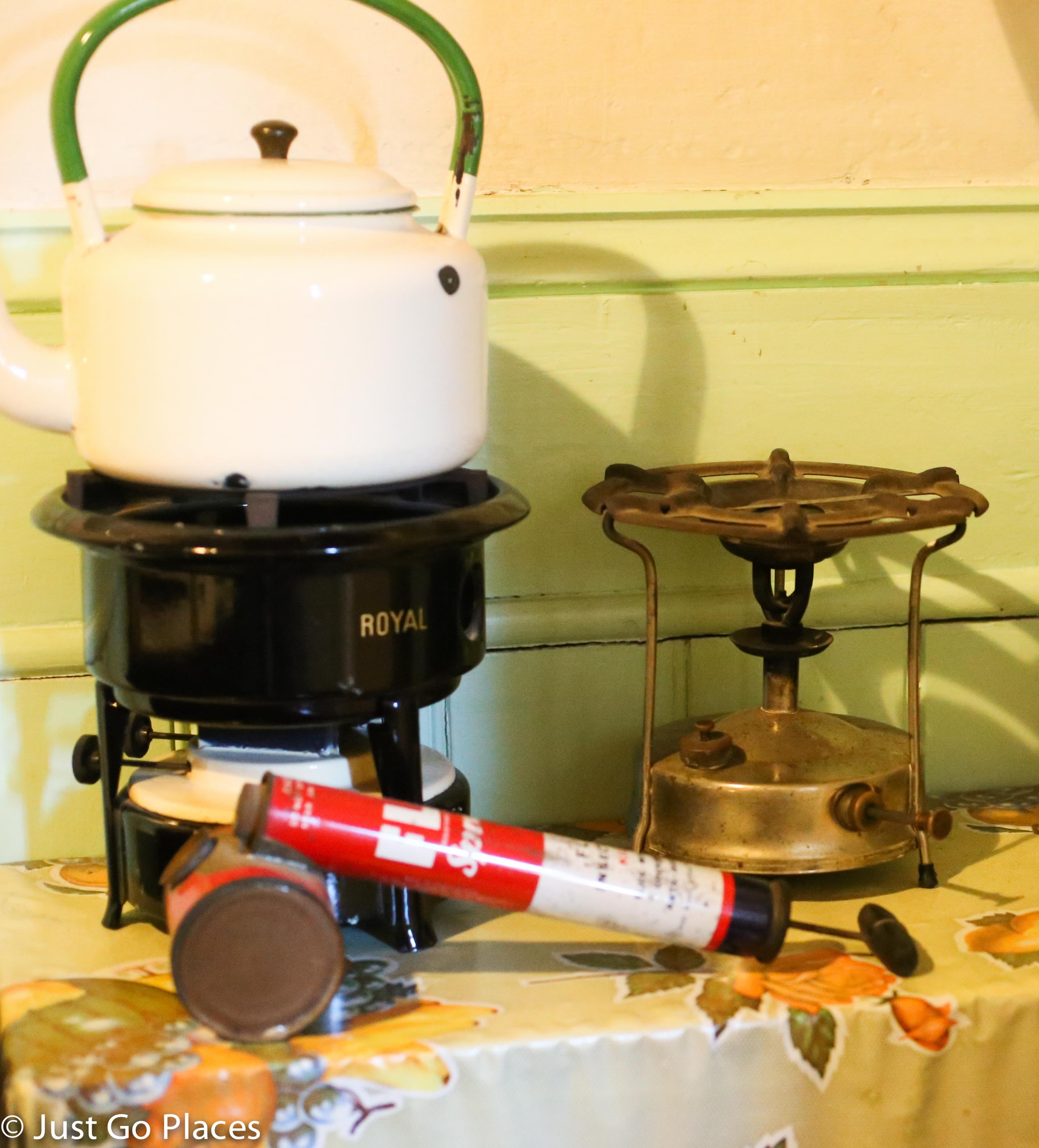 The house had only 2 beds which threw my daughter for a loop.  My daughter wanted to know how 5 people could sleep on 2 beds. This shack is smaller than her bedroom at home.  Of course, there was no indoor plumbing.

The inequity was so blatant that even my child of 8 could grasp this concept. I am glad that she opened her eyes to how the world is different in so many ways than what is her experience.

What I found chilling though is that this reconstructed shack in a museum is the reality for many people who live in the townships still. Even though we were advised from visiting any townships with young children, you can see the townships chock full of bleak little shacks from the road. “Those who cannot remember the past are condemned to repeat it.”

The District 6 Museum captures the pain and chaos of lives disrupted and memories lost very effectively. It is definitely a worthwhile stop in Cape Town if you would like to understand some of what happened during the Apartheid years.  And, yes, bring your children. There is nothing graphic in the museum but it will open up things that are worth discussing with the next generation.

There is a commemorative sheet on which former residents have written messages (seen below). The wounds clearly run deep.

The District 6 Museum is open Monday through Saturday.  It is located near the City Hall on Buitenkant Street.  You can buy tickets online through the website.