The first thing I notice at the Rio Sambadrome is the crush of humanity.  People are packed into the stadium seating with just enough room for little Brasilian surgically-enhanced bottoms.  Personal space, as we Americans like to call it, is disregarded. Luckily, pretty much everyone is standing and many are dancing.  The supporters of each Samba school enthusiastically wave their flags.  The beer was free-flowing and the party atmosphere infectious.  Everyone was somehow dressed up (or down!) even if the adornment is just a garland of flowers. Tickets to the Sambadrome

Most people in Brasil (or even Rio) don’t go to the Sambadrome.  It is way too expensive.  They watch the Samba School’s parade on television and celebrate Carnival itself at the blocos (street parades) or other private parties.

We got tickets to the Rio Sambadrome for $250 per person.  We would have liked to have box seats but they were going for $1000/person.  We were seated in Section 9 which is reserved for tourists.  It’s a terrific location right across from where the judges  sat.  Every parade that passed us was going all out to impress the judges. Having been to the Rio Sambadrome, I don’t think the more expensive box seats were any more comfortable.  They did, however, have a lounge area behind the seats so that our children could have slept there.  On the other hand, it was still cheaper to bring along a nanny and send the children home before they were too exhausted. The kids are dressed and ready to party.

We used Carnaval Turismo to book our buy our tickets and bus transportation to the Sambadrome.  They dropped us off in front of Stand 9, the foreign visitors stand, and picked us up there as well.

Tip:  Most of the people in Rio are out partying on the night of Carnival.  Taxis are few and far between.  Pre-organised transportation is a must.

Food and Drink at the Rio Sambadrome

The food served at the Rio Sambadrome is of the usual stadium quality found worldwide.  The Brasilian chain, Bob’s Burgers, has a stand that was doing brisk business of burgers, beer, whiskey and vodka.  The other option we found was pizza – a thick gelatinous layer of cheese on thick bread.  Neither food option was impressive but the beer was great!! food and drink stands at the Rio Sambadrome

In the stands, the vendors selling beer, water and ice-cream weaved their way expertly through the crowds.  People were joyous but we did not see anyone drunk or messy.  Although we felt safe in the crowd, as a precaution we did not bring any valuables or bags with us. The ice-cream sellers were a real service in the heat of the night.

The Sambadrome is a stadium like I have never seen before.  It is long and thin with a pretend road down the middle. The stadium seats are on either side of the fake road.  Each samba school parade starts with a parade and ends with a flurry of workers sweeping the road clean behind them in preparation for the next samba school parade.  Each samba school had their own theme, song and costumes.  A lot of the sartorial references were beyond me though. An Empire of the Sun?

The Sambadrome parades started at 8 pm and went on until about 4:30 in the morning.  Each Samba School had a maximum of an hour and a half to parade before they would start losing points. The parade has a clock which counts the time for each school.

Each night there were six schools that get to parade.  Although there are shows from Friday through Monday, the best schools perform on Sunday and Monday.  The whole thing was run with an impressive efficiency which I thought would make Brasil a world power if only they would apply it to their economy.

Photo Gallery of the Samba Parades

The Samba parades were amazing!  While the tickets were expensive, each parade was a spectacle in itself.  Stumbling home at 4:30 in the morning, we watched 4 of the parades at the Rio Sambadrome.  We felt we had gotten our money’s worth as each parade was an individual show in itself.  We went on the Sunday so we did see some of the best floats.  Unfortunately, this year’s winner was in the Monday parade. The outfits for both men and women were amazing. It was great to see the floats arrive as well as leave! A real crowd pleaser was a Pele lookalike running on top of a football. All sorts of fantastical creatures were made into floats. 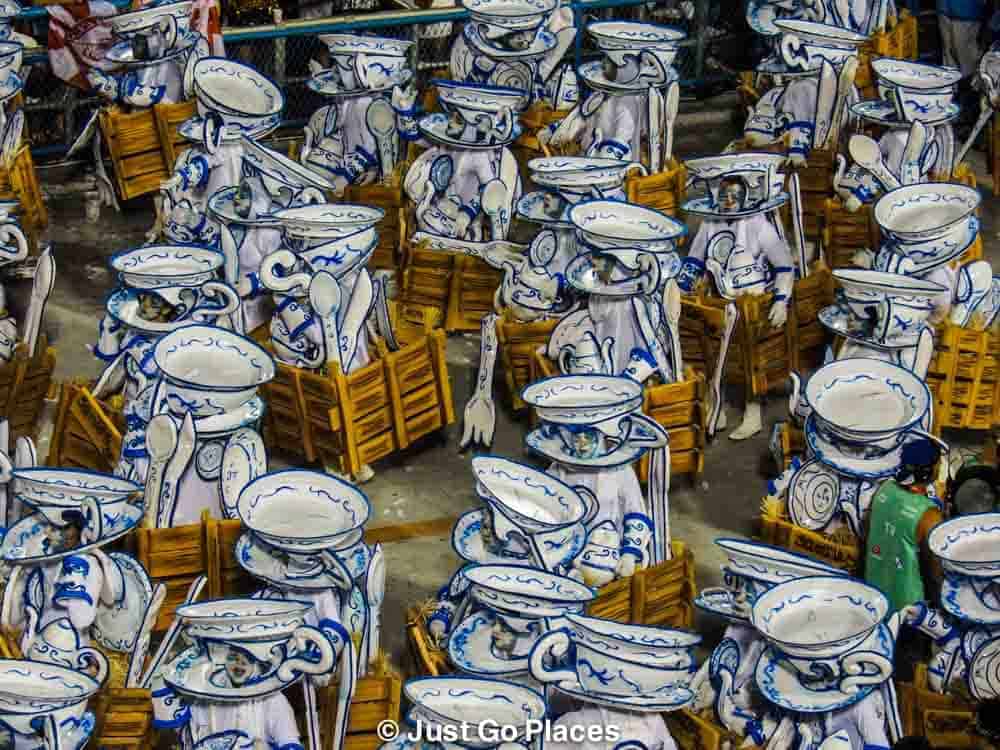 Portuguese influenced tea cups? Not sure why these people were dressed in these outfits. Nor did I understand why a bunch of football players came running out of the orca’s mouth. Criminals and a taxi? say what?? A drag queen dressed as the Queen of England (Ok, they are playing on the word queen). Bow to my magnificence peons!