Eccentric luxury sounds like a contradiction in terms and generally not something you want in a hotel. The Hotel Eclat Beijing is the exception though. It’s the brainchild of a Hong Kong tycoon who wants to bring contemporary art out of collector’s confines and put it in public spaces. Nice public spaces though. The Hotel Eclat Beijing is a member of the Small Luxury Hotels brand which has long been a favourite of ours for great luxury hotels that have style and panache. The Eclat Beijing delivers on all of those accounts and with a soupçon of irreverence. The elegant furnishings of the hotel lobby signal early on that this hotel pays attention to design.

I was a little bemused when we pulled up in front of a giant glass and steel encased mall with modern sculpture strewn across the front garden.  Was this a pit stop? We were supposed to be going to the Hotel Eclat Beijing. When the driver pulled out the bags, we realised we were at the hotel! The giant glass and steel pyramid entrance to the Parkview Green Mall.

Once you enter the mall, the entrance to the Eclat Beijing is off to the side. There’s a reception desk and a long lobby filled with more contemporary art. A glass escalator whisks you up to your key-coded floor. The glass elevator had a red traditional couch. We loved the juxtaposition of old and new.

The Hotel Eclat Beijing is definitely meant for lovers of modern art AND luxury. There are nods to traditional Chinese imagery (such as the red lanterns above the room doors) mixed with modern elan. Sculpture of a man breaking through a wall. What can it mean??

For example, both of our rooms’ terraces had variations of a barfing Buddha as well as giant upholstered leather sofas that would not be out of place in an English  country house library. What’s the story with the barfing Buddha? Maybe a bit avant-garde for us.

The rooms are spacious, the ambience discreet and the staff attentive. In some views, I felt like I was in a gilded jewellery box.

I actually felt like I was in an episode of the Truman Show where I was living in an enclosed bubble. We were separated from the noise, pollution and OTT-ness of Beijing by the glass dome which covered the mall. The view of Beijing from the Hotel Eclat.

I’ve heard people have complained that the glass dome was filmy.. Hello??? This is Beijing. The crazy pollution of the city is just outside that dome and the glass is never going to be clear.

The mall was perfectly temperature controlled so we could sit out in our terraces and enjoy being outside without actually being outside. While inside our little dome, we did not have the itchy eyes and a rasping throat that plagued us when we were out and about in Beijing.

I never thought I’d enjoy staying at a mall but I did! It also felt totally Chinese – an homage to conspicuous consumption and an artificial reality constructed to make everything seem pleasant.

Parkview Green Mall in Beijing is one of the best high-end malls in Beijing. It also has modern art scattered throughout.  The stores are a blend of Chinese and Western brands. We saw Gap, Build-A-Bear, Van Cleef and Arpels and Stella McCartney which is a fairly odd combination in my opinion.

Being located in an upscale mall has its advantages in terms of foodie options. It’s got a Starbucks, and a branch of a couple of our favourite Chinese restaurants (Dadong for Crispy Duck and Din Tai Fung for dumplings. There’s a whole slew of options including pizzerias, cafes and Japanese restaurants. Something for everyone, then. A multi-coloured Buddha is one of the modern art pieces on show.

Hotel Eclat Beijing is located in an upscale area of Beijing near the Embassies. It is located bout 20 kilometres away from the Beijing international airport. The hotel is in between the central business district which has the tourist sightseeing places. and the trendy area of Sanlitun. There is a subway nearby should you chose to avail yourself of that mode of transportation.

We did see other children around but the hallways and common spaces were quiet. Maybe you wouldn’t want small children around all of the artwork, but my kids got a kick out of it. Besides, its clear that everything at this hotel has a price tag. I’m sure if your kid breaks something, they will be expected to pay for it.

The television had mostly Chinese channels with a few English-channels like HBO and Cinemax. The room though had an Blu Ray player with a disc full of children’s favourites. A disc with English language movies to keep the kids happy.

There seems to be candy everywhere – from the lobby to the Afternoon tea. It may be a hipster thing but it made my kids very happy.

We had asked for connecting rooms so that our children could be next door. The initial rooms they gave us were not connecting. The hotel did rectify this situation as soon as they had a room free next door to the one in which we were staying.

You get a voucher for a free drink at the George Bar in the lobby when you check in. My husband took my son down to the bar to oversee the math homework he had been assigned from school. In return, he took my free drink voucher which  I thought was a fair trade. The French colonial glamour of the Georg Bar.

Although the atmosphere was lively, the bar was not too noisy with attentive staff. I loved the vintage French decor – a nod to the glamour and decadence of French colonial rule further south in Asia.

We thought our rooms with the connecting terraces were fabulous. I could totally see myself having an apartment in New York with a similar set up. It gave us enough privacy but also gave the children assurance we were nearby. We had temperature and pollution-controlled outside space to enjoy as well.

We loved our rooms which had connecting terraces. The bathrooms were large with separate soaking tubs and power showers. My kids were super-impressed with the Japanese style deluxe toilets which was operated with remote controls. In fact, the lid opened and closed with a motion sensor. The beds were comfy and we slept like babies. 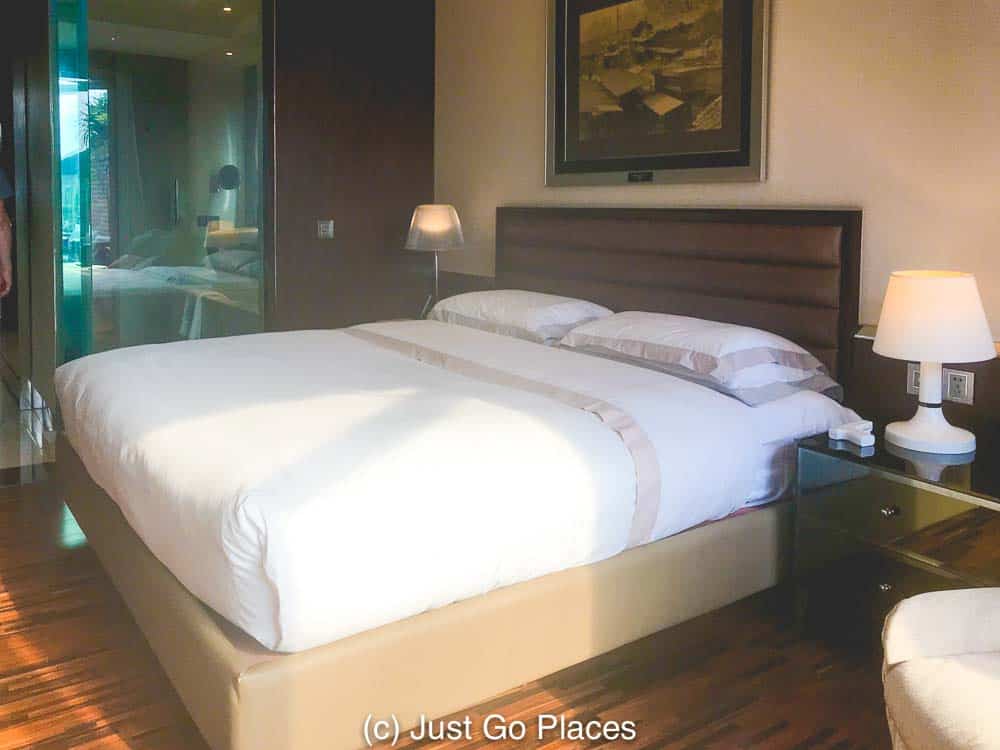 We had a comfortable queen bed in our room and twin beds in the children’s room.

This hotel is the first one which had a massage chair in each room. I am a huge fan of massage chairs and kept ours pretty busy sorting out the knots in my back from travelling and carrying bags. Why don’t more hotels have massage chairs? Travelling is the worst thing for my back My kids LOVED this lamp which turned on when you pointed the gun at it.

As with everything else in the room, the lamp was for sale. A price list handily appears on the television screen as does the room service menu. The television handily lists all the things you can buy from the hotel, including the bath mat. Who buys a bath mat?

The terraces were charming. Plenty of room to sit and relax in your own hideaway. They had couches, lights and giant tables perfectly set up for outdoor living. It reminded me of many New York City apartment terraces. One of the terraces in our hotel room at the Hotel Eclat Beijing.

If you pay more than we did, you can get one of the 20 rooms with terraces which have individual pools.

We were feeling so pampered, we opted to have room service on our terrace at the Hotel Eclat Beijing. It’s all done through the iPad in the room, but ironically the hotel staff had to call you to confirm a few things. For exam, my daughter wanted pasta but they called to confirm the type.

The food was excellent, the service prompt and we had a lovely relaxing time hanging out as a family in the terrace.

The room service dinner menu had a good variety of food options. We were all able to have a variety of items. I was craving something spicy which I got in the form of  Laksa soup. My daughter ordered pasta which is her go-to anywhere. My husband and son got comfort food for themselves, too – steak and ribs. The burgers and steak was Wagyu beef so it was a prime cut with matching prices.

I felt I was nitpicking when i tried to find things I disliked about the Eclat Beijing. It’s a bit too trendy – so there may be trends you dislike such as for example, the lack of privacy in bathrooms.  The afternoon tea and the gym were a bit lame. And, if you find good WiFi in Beijing that’s considered a bonus. Definitely don’t expect it.

I honestly really dislike bathrooms that allow you to see into them. On the plus side, there are window dimmers so you can have privacy. No matter how much you love someone you don’t want to watch them brush and floss their teeth. You can dim the window from the bathroom into the bedroom.

Afternoon tea is served to hotel guests. We were a little surprised to find that this meant a huge assortment of candy and some cakes. Needless to say the kids were thrilled. My husband and I were feeling peckish and expecting an English-style afternoon tea though with those little finger sandwiches. There was free candy on tap to the delight of my children.

The gym is a small room overlooking the mall which has just enough equipment to be adequate. The Wifi was honestly as terrible as in the rest of Beijing. Being in a luxury hotel is no guarantee of having good WiFi. Your best bet is to find the nearest Apple store and hang out fo awhile if you want to catchup on the outside world.

You can stay in Hotel Eclat Beijing and be in your own little world. Is that a good thing? It depends on your opinion of Beijing.

For the latest rates for Hotel Eclat Beijing, here are a selection of travel booking sites:

You can read other reviews of the Hotel Eclat on TripAdvisor which seem to like this boutique hotel in Beijing as much as I do.