Did you know that when the Allied Troops landed on the D-Day beaches, they were accompanied by a bagpipe player? Private Bill Millin, also known as Piper Bill, was ordered by the British commander, Brigadier Lord Lovat,  to play the bagpipes to keep the soldiers’ spirits up.

Traditionally, Irish and Scottish troops had been lead into battle by bagpipes.  The War Office though had stopped the custom because so many pipers had been slaughtered during World War I.  Lord Lovat ignored the orders though for his own battalion, the King’s Own Scottish Borderers, the only Scottish battalion on D-Day.  Lovat ordered Piper Bill to play because as far as he was considered the English War Office orders didn’t apply to the Scottish.  Piper Bill was the only piper on D-Day.

Piper Bill, only 21 years old, landed on Sword Beach, dressed in the kilt his father had worn in World War I, armed only with his bagpipes and his traditional black knife tucked into his kilt-hose.  He later admitted he was really cold because he wasn’t wearing underpants as was the usual custom of kilt-wearers.

While soldiers were falling under gunfire all around him, he kept playing and marching up and down the beach.  Later he was told the Germans didn’t fire at him because they thought he was crazy and felt sorry for him.

Piper Bill played his pipes for another 4 days before eventually his bagpipes got destroyed by shrapnel.  Piper Bill survived the war and lived until 2010.  There is a statue of Piper Bill on Sword Beach. 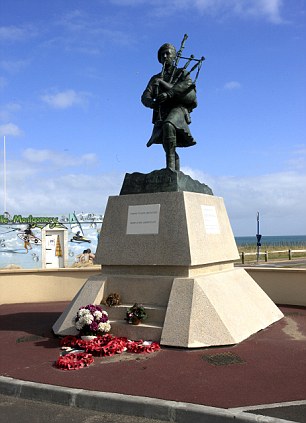 The story of Piper Bill was one of the many stories we heard last year in June when we went with my son’s BSA troop to visit the D-Day beaches in Normandy.  On the 70th anniversary of D-Day, many commemorative events were scheduled for the summer of 2014.  The Trans-Atlantic Council of the BSA joined in these events to ensure a future generation duly remembered the sacrifices of their grandfathers.

On D-Day (June 6, 1944) 156,000 Alied troops battled their way onto the French mainland onto 5 separate beaches.   The British and Canadians invaded at Sword, Juno and Gold beaches.  The Americans invaded at Omaha Beach and Utah Beach. 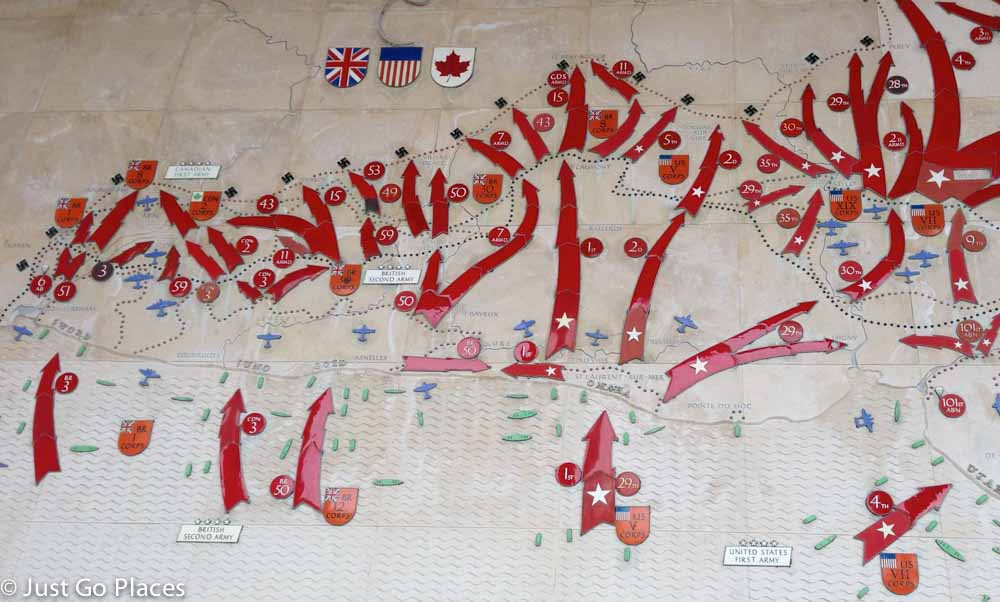 The D-Day plan of attack

Piper Bill landed with the British troops at Sword Beach which was chosen because of its nearness to the city of Caen.  This city would be important for the Allies to capture because all the main roads in the area ran through Caen.

The Canadians landed at Juno Beach in order to establish a link between the two British landing spots of Sword and Gold. The Juno Beach Centre is Canada’s museum for the 45,000 Canadians who lost their lives fighting in World War II. 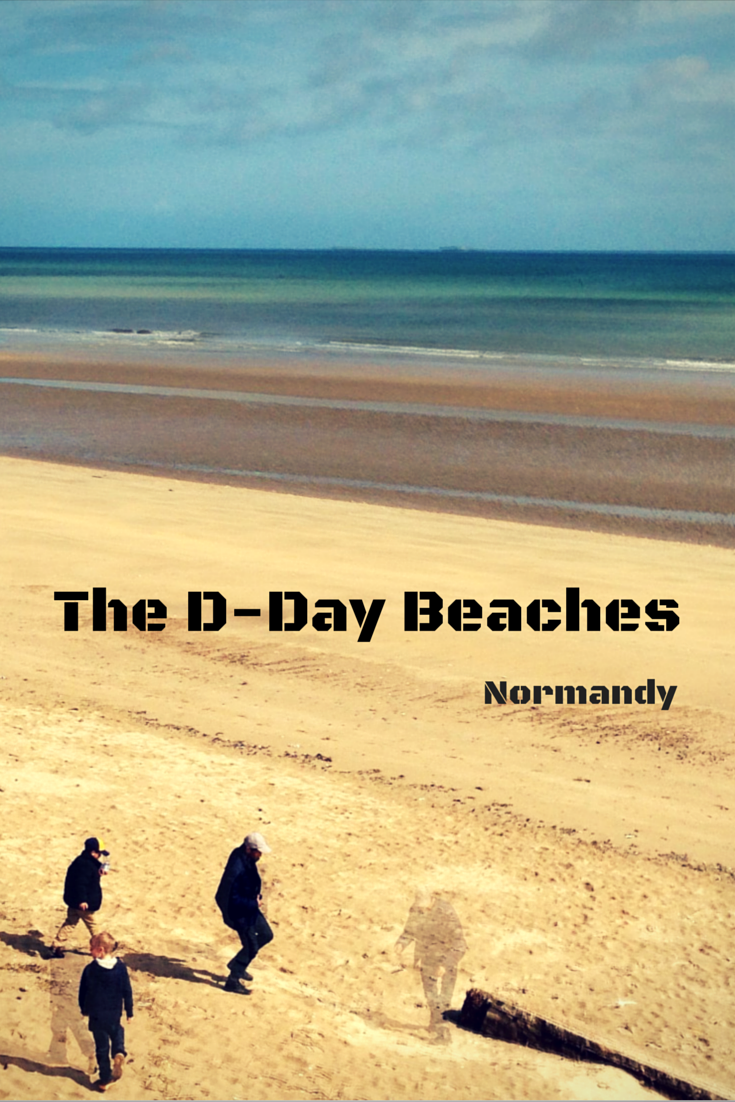 The British also landed at Gold Beach to establish a Mulberry Harbour off its coast. The Allied forces needed to unload supplies for the landing troops but the Germans held all the ports.  A Mulberry Harbour was a feat of engineering whereby prefabricated concrete sections were towed to Normandy and assembled on-site to create a port the size of Dover in England.  Today you can see the portions of the pre-fabricated sections still left off-shore Gold Beach in the picture below. 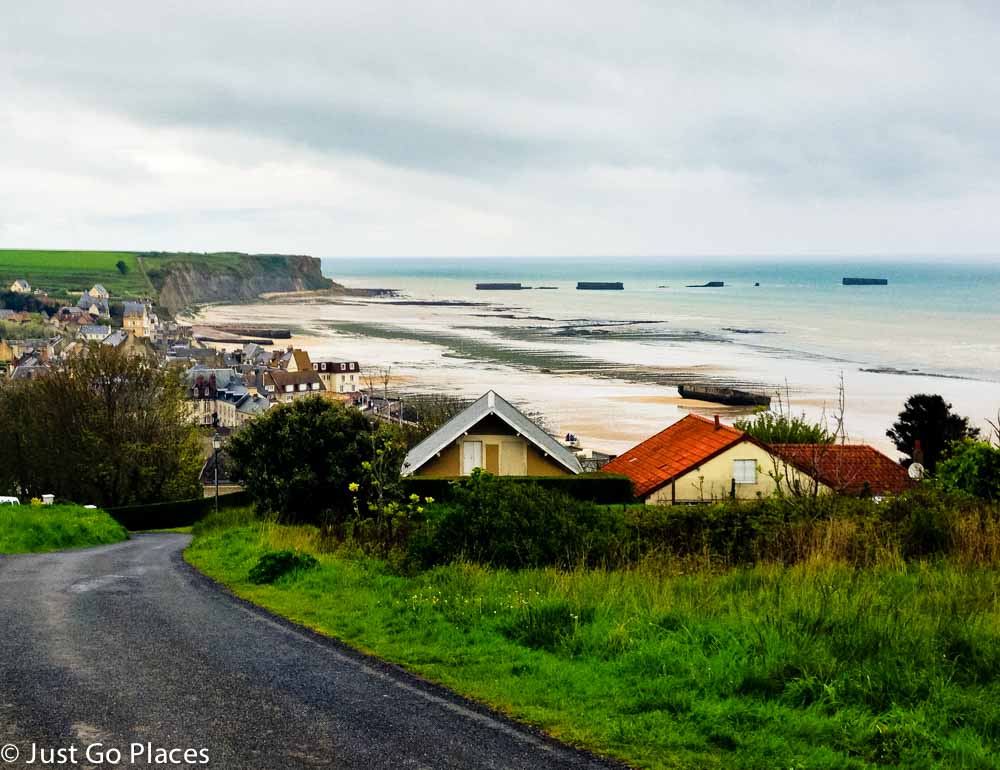 The wide, sandy D-Day beaches are beautiful today.  You can see, however, how easy it would be for the Germans to pick off the Allied troops as they landed. 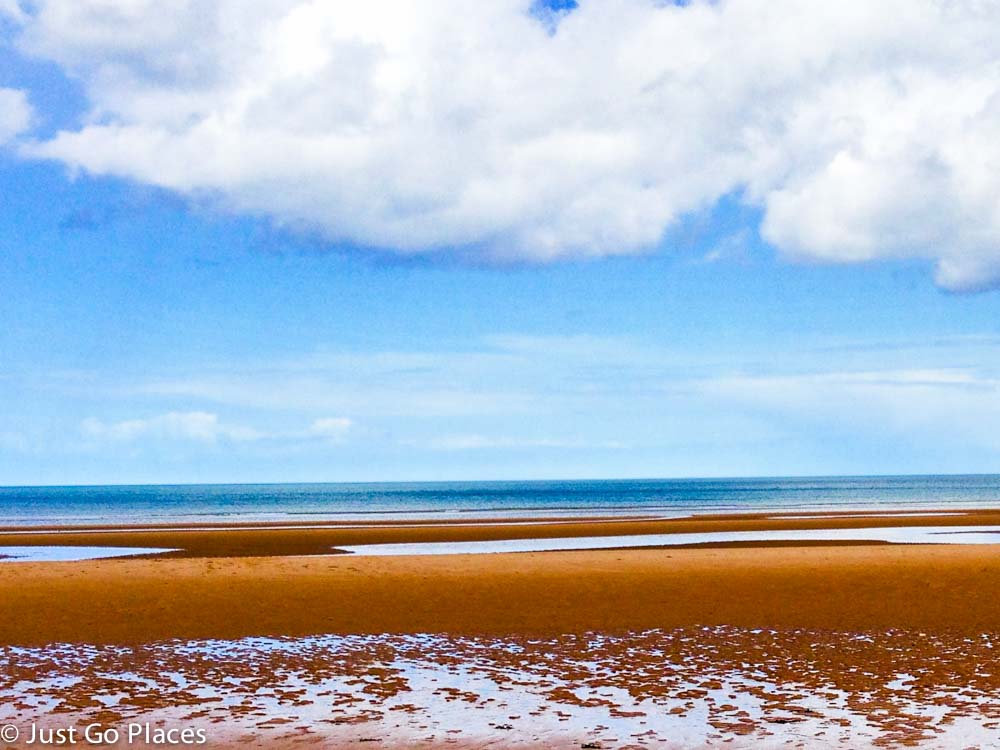 Thousands of soldiers were indeed shot dead by the German troops.  The statue, Les Braves by French sculptor, Anilore Banon, commemorates the more than 9000 soldiers who fell on Omaha Beach.  The stainless steel arms rise up to the sky symbolising hope, freedom and brotherhood. The American cemetery at Colleville-sur-mer overlooks Omaha Beach. 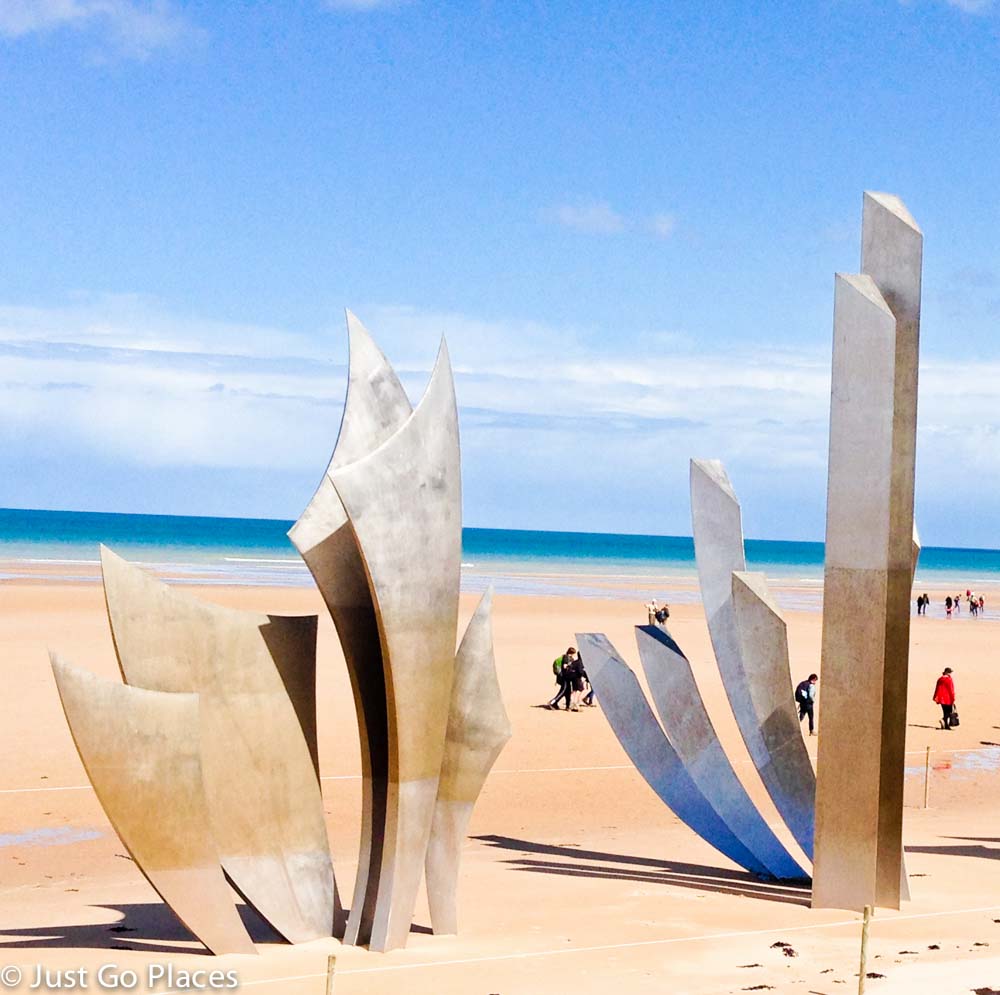 Why Visit the D-Day Beaches?

The 70th commemoration of D-Day in 2014 probably marked the last time that a significant number of World War II veterans would be able to attend such an event.  With the passage of time, the events of World War II are receding into the mist of history.

Until we visited the beaches, we had not fully comprehended how difficult the landings would have been or the courage it took to march into near-certain death.  Our children definitely gained a better understanding of World War II and the horror of war by visiting the battle sites of Normandy.

There are some excellent memorials, museums and monuments on the Battle of Normandy being maintained by a dedicated team.  It is good for everyone to remember that freedom comes with a price tag.

We have visited the area twice with the BSA because they tend to return to the Normandy D-Day Beaches usually every 3 years. We have stayed at a campsite near Omaha Beach and also a small hotel nearby.

The hotel options in Normandy are not very many but the French have really great campsites – complete with kids play areas, pools and cafes that serve food (and wine!). My son camped with his troop but the rest of my family stayed in a little cabin on the campsite. So you can either do traditional camping, rent a cabin or bring your motorhome for holidays in Normandy campsites.

When you are in Normandy for the D-Day sites, be sure to check out the rest of the area which is chock full of history. For example, there are charming towns like Bayeux (with the famous Bayeux Tapestry) and the castle of William the conqueror in nearby Falaise.