Salzburg is known by many as the setting for one of the most famous films of all time, The Sound of Music.  In fact, every year about 300,000 visitors flock to the city to recreate the songs and story from the film.  Do you want to stay in a hotel associated with The Sound of Music?

I have found two great options – one is Villa Trapp which is the actual home of the real von Trapps depicted in the movie.  The Schloss Leopoldskron is the von Trapp home from the movie, a Hollywood reimagination of what the von Trapp home would have looked like if the family had oodles more money.

The Villa Trapp is located in the outskirts of Salzburg.  Open as a hotel since 2008, the management have worked with the actual remaining members of the von Trapps to make the house as authentic as possible.  Maria von Trapp visited the hotel at its inauguration thanks to a private plane lent by a Salzburg local, the owner of Red Bull.  She was able to provide lots of details of how the family lived.

For example, this Chinese chair was a gift to Georg von Trapp for his defense of Austrian interests during the Boxer Rebellion in China.  Presumably they abandoned it because it was too heavy to unobtrusively sneak over the border. 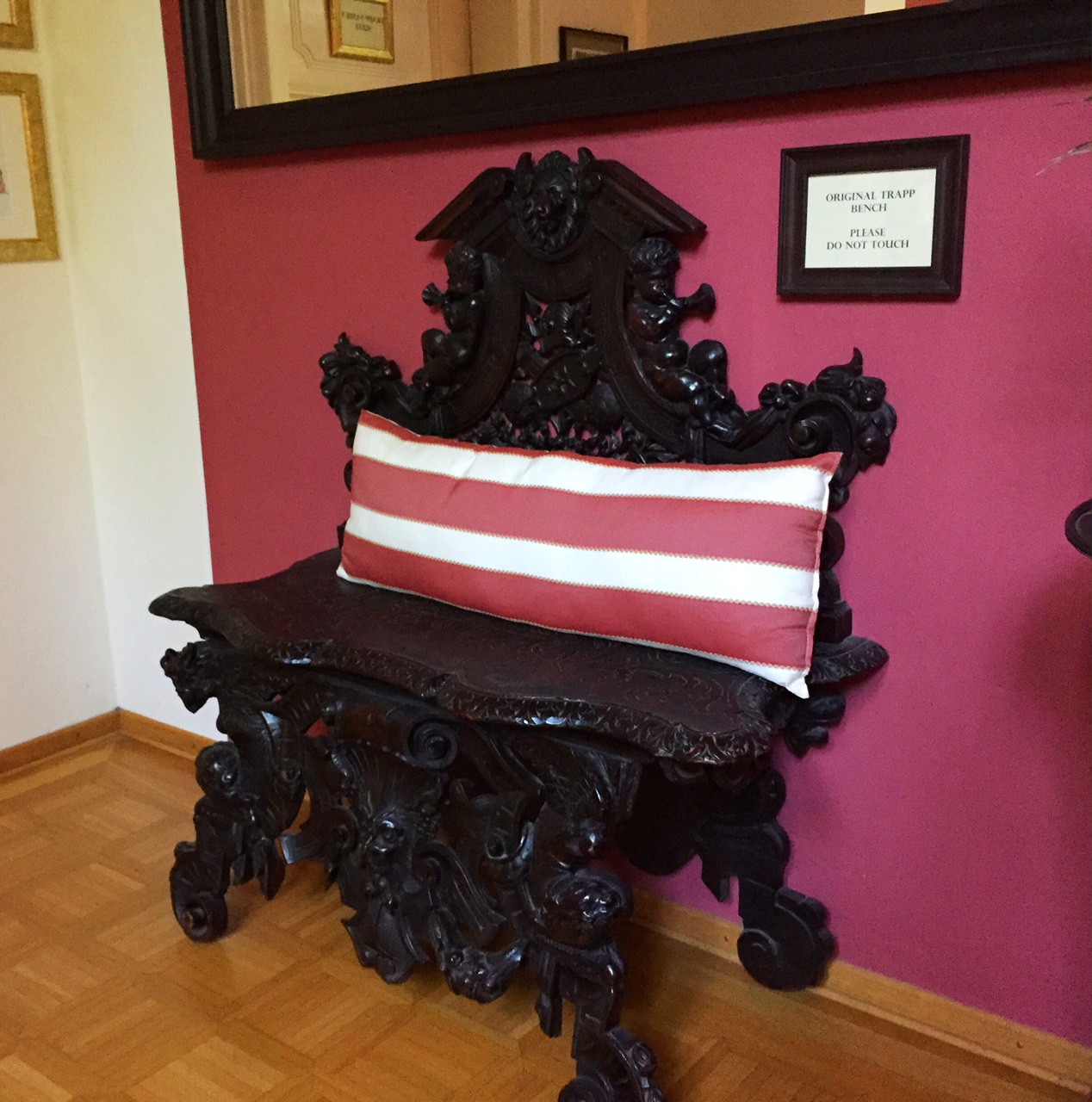 The von Trapps were pretty unhappy with Hollywood movie version of their father.  Unlike the serious disciplinarian played by Christopher Plummer, the actual Georg von Trapp was a loving father and somewhat of a pushover.  Yes, he did use a whistle, but it was only because the von Trapps had the largest private garden in Salzburg at the time.  The sound of the whistle would carry better than his voice over the acres of gardens because the children were usually playing outside.

The History of Villa Trapp

Georg von Trapp bought the house which had been built in 1863 from the previous owner, his uncle.  After his first wife died, Georg von Trapp wanted a country house to raise his children.  The von Trapps lived at this house from 1923 to 1938.

When the von Trapps fled the Nazis, they rented the house to the neighbouring Missionaries of the Holy Blood.  The house then was appropriated by Heinrich Himmler, Hitler’s feared commander of the SS and Gestapo, for his personal.  The grounds were used for barracks and the walls were covered with barbed wire to create a compound.

Hitler would meet at Himmler’s house in order to hatch their nefarious plans.  One story says that on one visit to Himmler, Hitler overheard a German guard whistling a Russian song which infuriated him so much, he had all of the guards on duty shot.

After the fall of the Nazis, the von Trapps convinced the Missionaries of the Holy Blood to purchase the house.  The order built a chapel in Himmler’s office in order to cleanse the house of its bad karma.  It was only in 2008, that the Order partitioned off part of the estate and allowed the house and some of the grounds to be opened as a hotel.

The Interiors of Villa Trapp

The 14 bedroom villa makes a charming and peaceful hotel in a secluded location.  Here is the staircase where according to Maria von Trapp, the children would slide headfirst on their stomachs down the bannister.   You can also see the door that the daughter Maria (renamed in the movie to avoid confusion) locked behind her when the von Trapps left for the last time in 1938.

The living room is a welcoming and comfortable space which opens out into the garden. 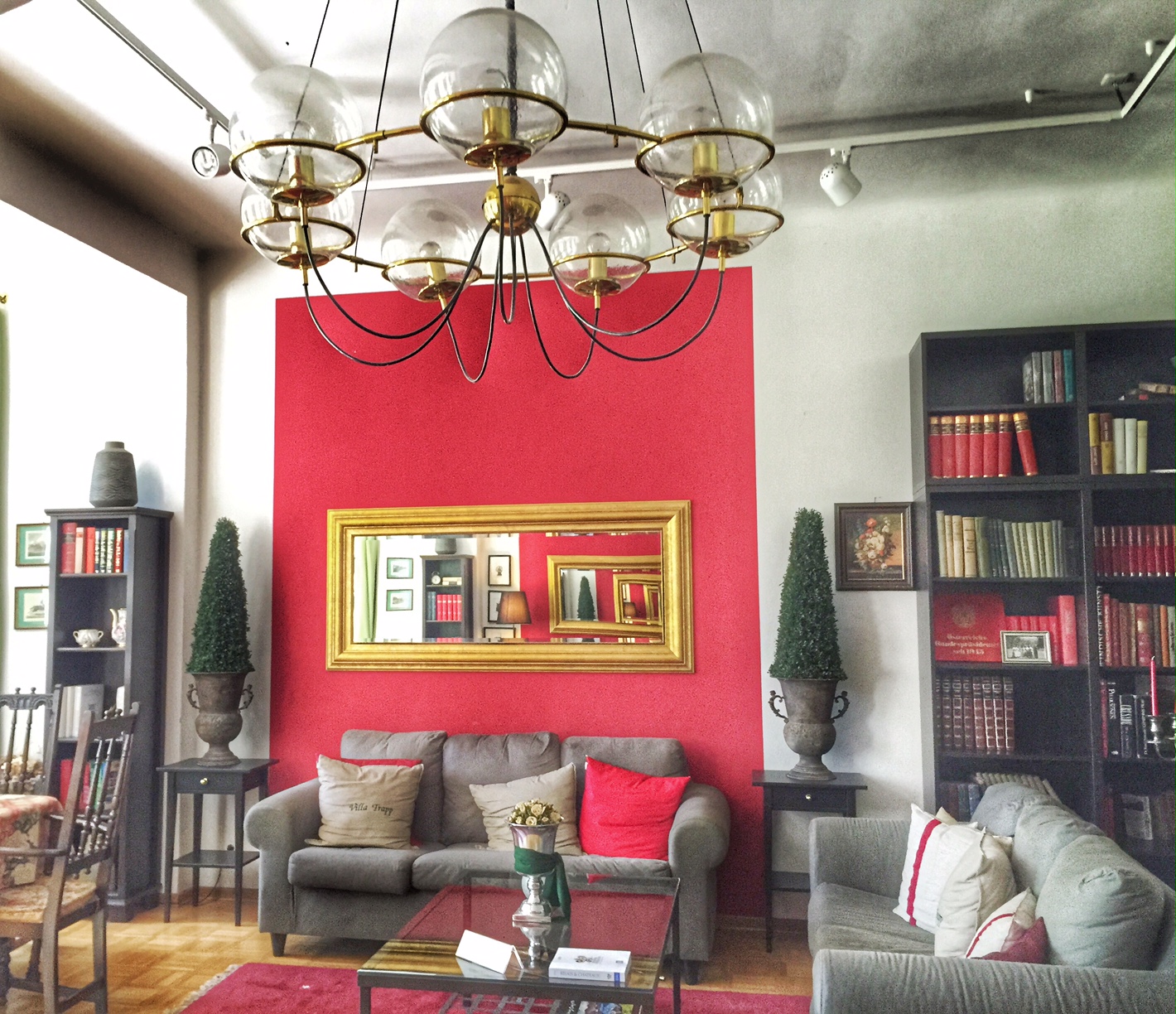 From top to bottom:  a photo of the von Trapp family with the first Mrs. von Trapp; the rear of the house and the enormous garden; the dining room (one of the earlier scenes from the movie where all the children burst into tears); the room of the children are individually labelled from Maria von Trapp’s memory; and Maria von Trapp’s bedroom (where the famous song My Favourite Things was sang in the movie).

Villa Trapp is a beautiful large house with extensive gardens but it is not the lakeside castle pictured in the movie. For the Hollywood film, the exteriors were from Schloss Leopoldskron (for the back) and Schloss Frohnburg (for the front).  The interiors were sets recreated in a Hollywood studio.

The Leopoldskron castle is truly impressive both on the inside and out.  Movie scenes could only be shot on the outside of the castle because it was in private hands at the time the film was being made.

The castle is a frothy white and gold confection created in 1736 for the family of the Prince-Archbishop of Salzburg, Leopold von Firmian.  Yes, you read that right. The Prince-Archbishops of Salzburgs were not so big on the vow of celibacy.  Anyway, Leopold loved the house so much, his heart is buried in the Castle’s chapel even though his body is at Salzburg Cathedral.

The Sound of Music At Schloss Leopoldskron

The artificial lake was used in the scene in the movie when Julie Andrews and the children fall out of the boat.  Then everyone has lemonade on the terrace (photo above). 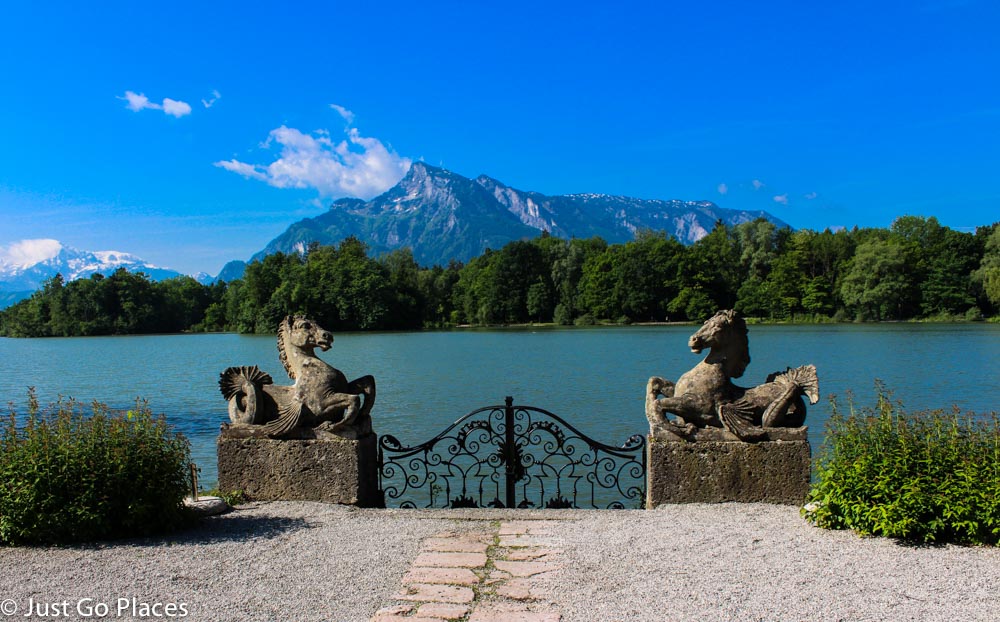 The gazebo from the song “16 Going On 17” used to be in the grounds of the castle but had to be removed to Schloss Heilbrunn because so many people wanted to see it.  You may also remember it from the song “Something Good” when Georg and Maria pledge their love.  The actual pavilion used in the movie was a larger model that was recreated on a Hollywood set.

The Venetian Room in the Schloss was recreated in its entirety in Hollywood for the ball room scene in the film.

The Hotel at Schloss Leopoldskron

There has been a hotel at Schloss Leopoldskron since 2014.  Many of the bedrooms are located in the Meierhof, another building on the grounds which is not the castle.  It’s definitely not as spectacular but then the prices no doubt are cheaper.

The Schloss has been restored to its former grandeur.  You really do get a sense of how much wealth the Prince-Archbishops of Salzburg had thanks to the production of salt.

The breakfast room in the Schloss is a two-story grandiose room.  You definitely get the impression that you are in a castle!

The grounds at the Schloss are great.  My children had fun chasing ducks and playing on a swing hung from the tree.  The hotel manager told me that they are family-friendly insofar as children are welcome at the hotel but there are no specific facilities for children.  Families do have access to the public park (right outside the grounds of the Schloss) which has a pool and a mini golf. 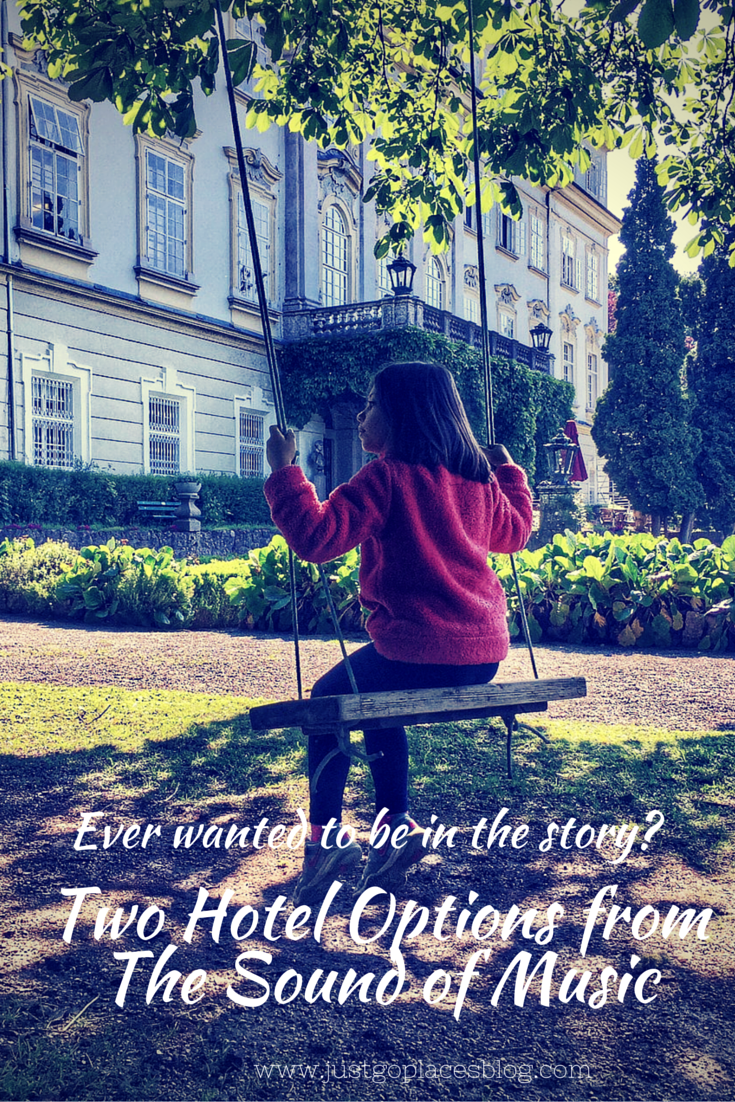 Villa Trapp is located at Traunstrasse 34, Salzburg 5026.  There are bus and train connections to the hotel.  It is not, however, the easiest to access if you don’t have your own car.  The website is in English and is pretty informative.  If you choose to stay elsewhere, you can just do a tour of the Hotel with an advance booking (which is what we did).

Hotel Schloss Leopoldskron is much closer to the old town section of Salzburg.  It is located at Leopold Leopoldskronstarasse 56-58, Salzburg 5020.  You need to be a hotel resident to have access to its grounds or otherwise join in one of their public events (such as the Sunday brunch or Shakespeare in the Park events).  The Meierhof has 55 rooms and the Schloss has six suites.