Have you ever wanted to live the English country house lifestyle but sadly you lack the requisite English country house?  Fowey Hall Hotel is perfect for you. A grand mansion comfortable decorated with dogs and children running around on landscaped grounds, Fowey Hall should fill your curiosity about what those grand manor homes like Downton Abbey would be to live in today. By the way, in true quirky English fashion, Fowey is said like it is spelt Foy. So Fowey Hall, a luxury family hotel in Cornwall, gave us a cool escape into country life if only we had been lucky enough to be born with a silver spoon in our mouths. 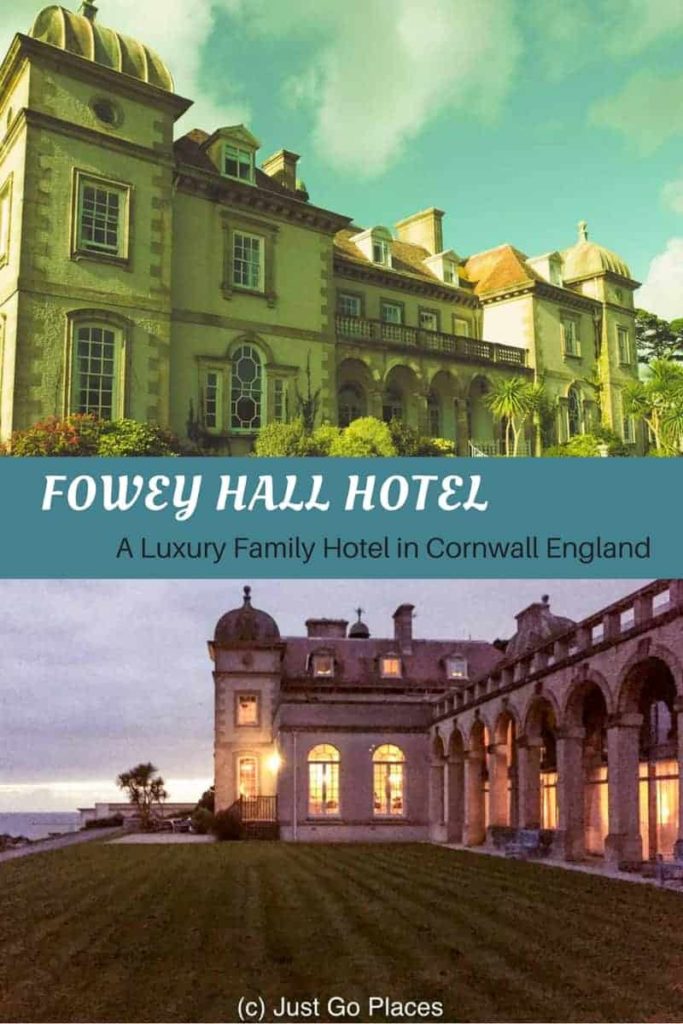 Looming above the little port town of Fowey, you can make out a series of large Monterey Pine trees. Behind the trees stands Fowey Hall, the former home of Sir Charles Hanson.  Hanson was a local boy who went to Canada, made his fortune as a lumber baron and returned home in spectacular style.  The town elders felt his home dominated the view of the town (and in fairness they were right).  Hanson planted the Monterey Pines to soften the look somewhat so that it is only from certain angles that you can see how enormous the house is in relation to the town. Fowey Hall looms over the town of Fowey behind the trees.

Around 1889, Hanson acquired his land from the Rashleigh family who were the local landowners. He was a man with a plan and lots of spare cash. Not only did he have his own money but he had married a Canadian heiress.  Hanson created his home in the latest style with no expense spared – lots of wood, marble and even central heating.  The grounds were more extensive in Hanson’s day than they are today. Monterey Pine Trees hide Fowey Hall from the town below.

Hanson used Fowey Hall to entertain and to further his political ambitions.  Telegrams from the day show that he expended great energy trying to get the Royal Family to visit.  Plenty of notables did visit and Fowey Hall was overflowing with life and energy.

From 1900, Hanson based himself mostly in Belgravia in London because of his interest in politics. He became a member of Parliament for the nearby town of Bodmin in 1916. The next  year, Hanson got himself elected  Lord Mayor of London, the highest political office he gained. Hanson remained in Parliament until he died in 1922.  His family eventually sold Fowey Hall in the 1950’s.

Fowey Hall May be the inspiration for Toad Hall in Kenneth Grahame’s famous book, The Wind in the Willows.  Grahame was a frequent visitor to Fowey Hall as a friend of the Hanson family.

We had a ground floor room because we brought our dog with us. Our neighbours had dogs, too, so I gather we were in the dog-friendly wing of this luxury family hotel in Cornwall.  The sliding doors opened directly onto the lawn so that he (and the kids) could go running outside in full view of the room. Our room was spacious  with 2 fold-up beds for the children and a queen-size bed. Our dog in the less formal breakfast room with the Mr. Toad statue

The bathroom had a full shower and a bathtub.  My kids got bath bombs from a store in Fowey which made bath times lots of fun. 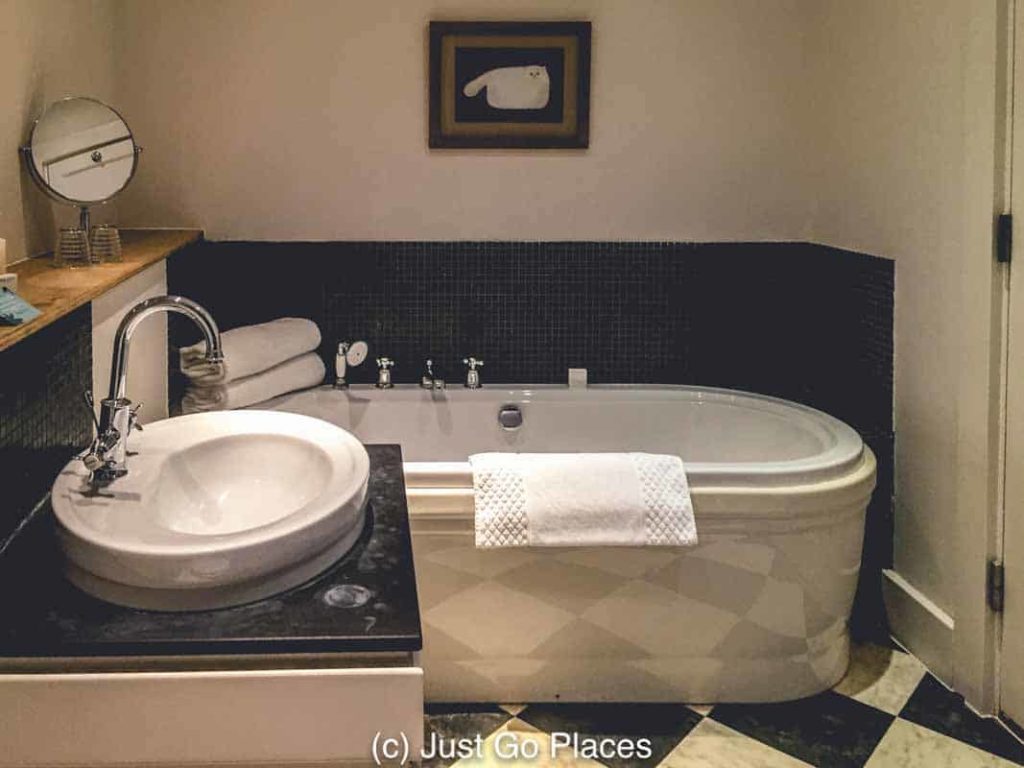 A stand alone bathtub is a perfect place to unwind whether you are a kid or an adult.

Fowey Hall Hotel has all the amenities you would expect from a luxury family hotel in Cornwall.  There is a spa and a large pool.  My children spent every evening playing in the pool. Then we would borrow DVD’s from the front desk and snuggle up and watch movies.  To my delight, they had Stardust, a 2007 British fantasy romance which my children had never seen. We all liked it so much, we watched it several times. yay! 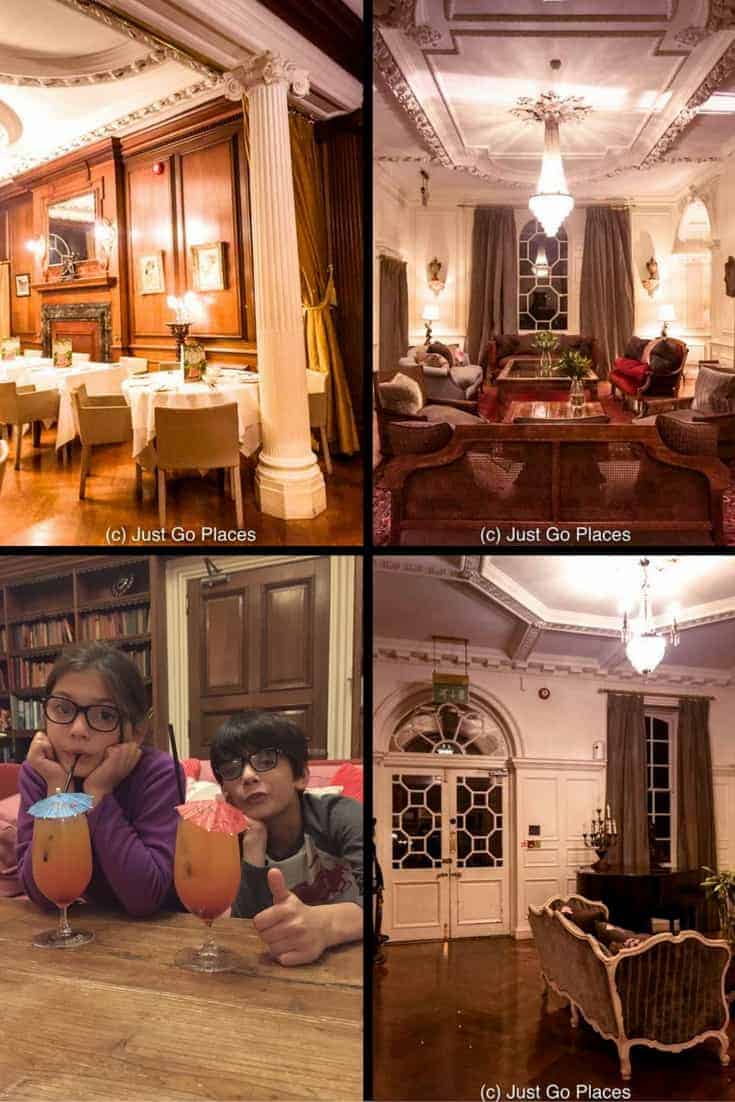 Although the interiors are as grand as you would expect, the hotel is very family friendly (right down to the little mocktails the kids were given to accompany our pre-dinner drinks).

Run by the Luxury Family Hotel group, Fowey Hall Hotel has put a lot of care into making sure families are  felt welcome and catered.

My children ate from a mixture of the kids menu and the adult menu.  For example, every morning my son insisted on having dippy eggs and soldiers (an English kiddie breakfast item of toasted slices and semi-boiled eggs).  My daughter preferred the adult version of oatmeal (with honey) to the children’s version of oatmeal (plain).  The oatmeal, by the way, was delicious – cooked slowly on an Aga not the microwaved quick oats kind. 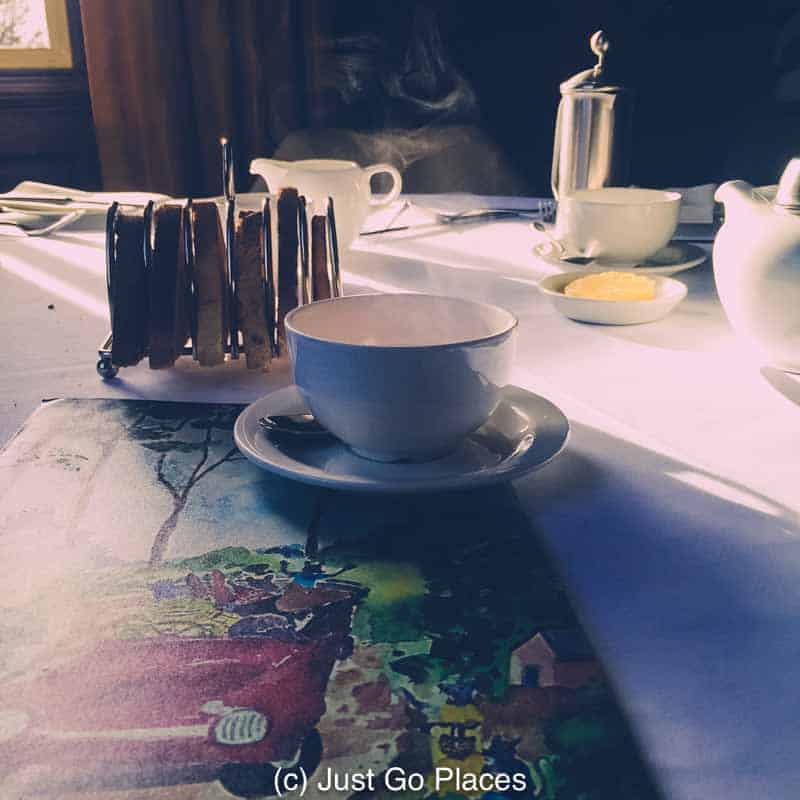 Is there anything more English than a steaming cup of Breakfast Tea?

After breakfast, the highlight of every day was feeding the chickens at 10AM and checking for eggs. My kids joined the children’s club members for this activity only.  The children’s club at Fowey Hall Hotel is open for children up to 8 years old. It is in a separate building from the main hotel. The kids received kites as welcome gifts which they were desperate to fly.

There is an early dinner time if you wanted to eat early.  Even if we didn’t eat at the hotel, we would have snacks and cocktails (mocktails for the kids) in one  of the warm and cozy lounges.

Every morning without fail, my children would run out the door and go on the zip wire.  Seriously, they could not get enough of that zip wire.  There was also footballs to kick around, little trampolines to bounce around, and a playground to explore. 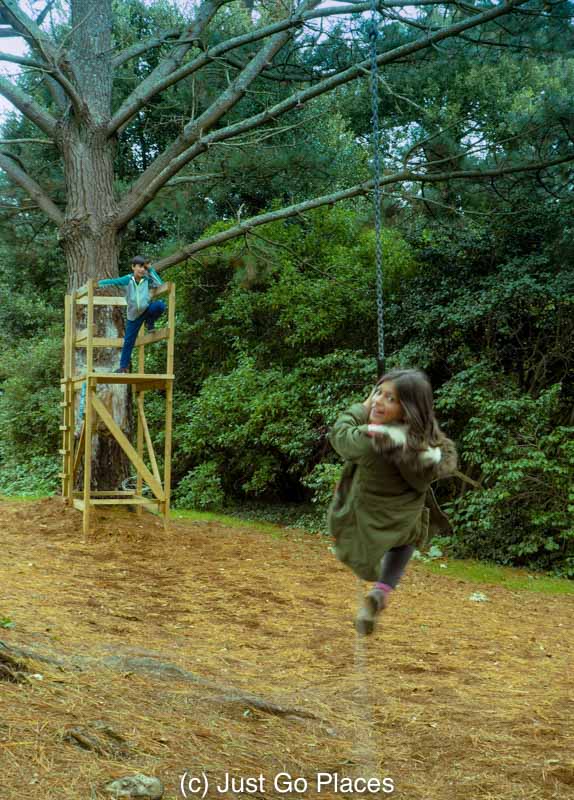 The zip wire was a major hit with all the children, not just mine.

Luckily, the hotel provided Wellies (aka rain boots, gum boots etc) because my son had outgrown his pair from the last time he had worn them.  He ran around the entire estate with his sister and the dog without ruining his trainers. Little wellies that you can borrow by the front door.

Fowey Hall Hotel is located on a ridge above the charming Cornish harbour town of Fowey.  The main town car park is located next to Fowey Hall.  There are town buses down the hill and back up to this car park if you don’t feel like walking the steep 10 minutes into town.  These buses (more like minivans) run every 15 minutes during the day. The lawn at Fowey Hall is great for an impromptu football game.

The location above the town means Fowey Hall has a great view of the Fowey estuary.  Mornings you can see the mist drift away and the town appear below you.  At night, the town lights sparkle down the hill below you.  The best place to see the sunset is the pool deck area. We were in this little colonnade part with a lawn in front of us.

My children LOVED their stay at Fowey Hall Hotel which pretty much made their visit to Cornwall.  They loved having (i) a zip wire outside their door, (ii) their dog with them, (iii) an indoor pool to play in and (iv) feeling like grown ups with their mocktails playing board games in a lounge in front of a glowing fire.

My husband and I enjoyed ourselves as well.  We felt the hotel was very conveniently located for tourist attractions on the south coast of Cornwall.  We liked the comfortable shabby-chic atmosphere of the hotel where our children and dog felt at home too. 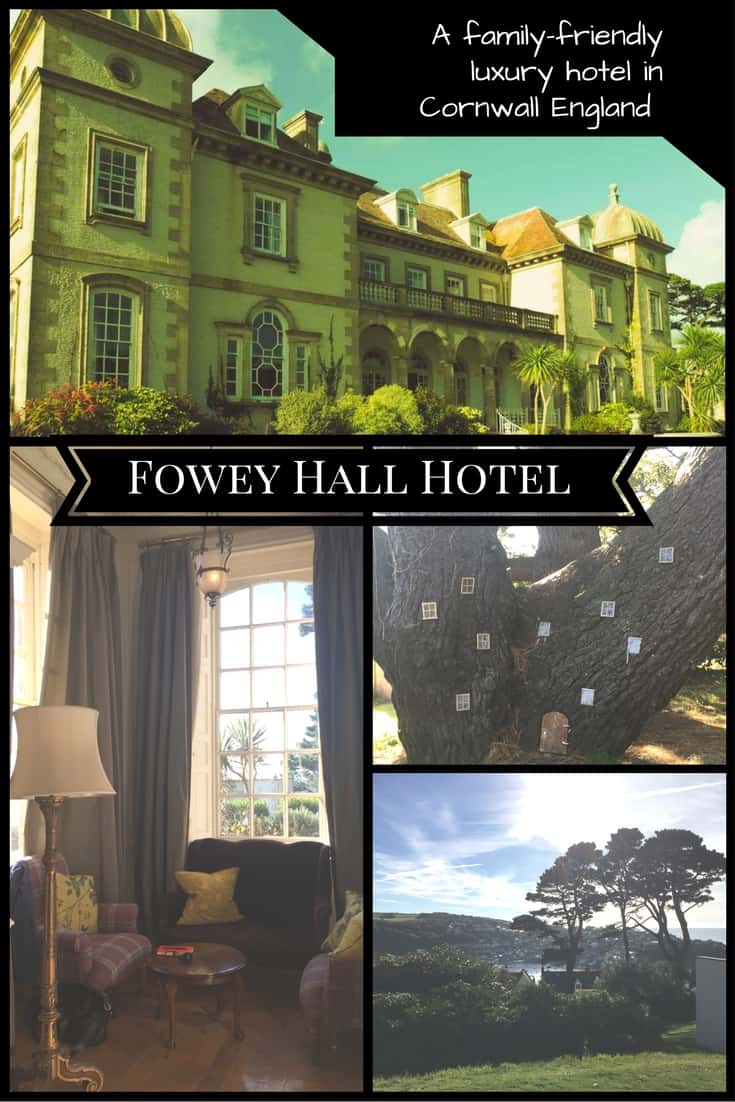 From top clockwise (the side lawn, a fairy tree, the view over Fowey estuary and a snug nook in one of the lounges)

Unlike many other primary school children, our children had 2 weeks off for their October break.  We stayed for 5 days in the week running up to the one week of that most children in the UK had. The beginning of our stay was quiet and peaceful with more adults than children. As our stay progressed, the hotel did have more children to stay. It did get noisier but we never felt overwhelmed by all the children.  It helps that the hotel is huge!!

Just Go Places did not receive compensation of any type from Fowey Hall Hotel in exchange for writing this article. This article does include affiliate links. Your clicks, purchases and bookings do not cost you any extra.