For fans of the paranormal, Miami in South Florida is a hotbed of mystery, intrigue and restless spirits. After all with a nickname like the Magic City and a diverse group of residents, Miami is well-positioned to stir the imagination. From a haunted hotel in Miami to a sinister cemetery, here are the best Miami ghost tours and haunted places in Miami to send shivers downs your spine.

If you are looking for a one-stop scare-fare, go on a Miami Haunts tour, a walking tour taking you on a historic ghost stories tour in the city. The main tour takes only 1 hour across one 1 mile of the city. You can add an extension to the main tour for another half hour to take in another 4 sites.

Kick off the tour at Lummus Park and pass by Villa Casa Casuarina, the famed Versace house. You also get a decent helping of Al Capone history on Española Way. The tour tells tales of some of the most gruesome deaths, mass murders, and crimes of passion to see on the streets of South Beach.

If you are looking for organised ghost tours, Miami will not disappoint especially during September and October for Halloween.

For something a little more DIY, we opted to do a driving haunted tour of Miami. During our most recent stay in Miami in February, the weather was cold and rainy.

A driving tour that explained the history of the places we visited while we stayed comfortable and dry seemed the way to go! Moreover, this tour comes as an app on your phone. You can stop and listen to it again or stop and do something else along the way if something catches your fancy (such as a stop for lunch in the Wynwood Grafitti district!).

Plus, we were able to start near our hotel (The Confidante Miami Beach) and take the tour in a loop from there. We found the driving tour much easier to do than to try and coral grumpy teens for a tour at a specific place and time.

Many of the historic haunted places in Miami date from the early 1900s when Miami experienced a boomtown ethos. Developers built hotels for rich people escaping the Northern winters and some of the rich built their now extravagant villas. There’s a whopping 189 places in Miami listed on the National Register of Historic Places!

Here are 10 of the most haunted places in Miami, the glowing jewel of the Sunshine State.

An iconic landmark in Coral Gables Miami since the 1920’s, the Biltmore Hotel has hosted a whole string of famous guests, like Al Capone and Franklin D. Roosevelt. The stories of haunting began when a gangster, Thomas “Fatty” Walsh, was shot here in 1929 over a gambling debt.

Turned into a military hospital during WWII, the hotel was an abandoned building for almost 20 years after the war. Eventually the Biltmore Hotel was returned to its former glory as a grand hotel in the 1980s. Soldiers on Miami Beach, in a historic photo at HistoryMiami Museum.

As time passed, more and more accounts of the Biltmore’s supernatural guests surfaced usually wounded soldiers or those who died in the building during World War 2. People have reported hearing Fatty Walsh’s footsteps and the mysterious scent of cigar smoke on the thirteenth floor of this haunted hotel in Miami.

Even before this mansion became the site of the untimely death of Gianni Versace in 1997, it has had a history as part of haunted Miami.

The mansion’s first owner, Joel Freeman, died a slow and painful death in the master bedroom of Villa Casa Casuarina.Freeman’s family were driven to the brink of insanity while living in the house, recounting their night terrors of their father dying again and again. The Versace Mansion in Miami is a popular place to visit for Miami Ghost Tours.

The mansion fell into disrepute in coming years but those who passed through its doors were disturbed by ominous dreams and inexplicable events.

Although this notorious past makes the house one of the most haunted spots in Miami, you too can possibly experience the creep factor because it is now a boutique hotel. We only had lunch at the Casa Casuarina by the famous gold-covered pool but we didn’t spot any eerie sounds or the ghostly apparition of Gianni Versace here either.

The Betsy Hotel became an army base during World War II only a few months after opening. Troops ran amuck, making the most of their last days before deployment to Europe.

The Betsy’s pas includes accounts of bar brawls gone wrong, a gun fight over a poker game, and shenanigans involving organised crime. There is also a very high suicide count.

Now a luxury hotel, the Betsy Hotel is one of our favourite places to stay in South Beach. Although visitors often hear leather boots marching around the corridors or gunshots being fired, we must be lacking in imagination since we have never experience any paranormal experience on our visits to the Betsy. In fact, we had no idea it was one of the creepiest places in Miami until we took our Miami ghost tour. On a DIY Ghost Tour, Miami offers up The Betsy Hotel which has a fabulous restaurants to visit if you are feeling peckish from searching for paranormal activity.

Located on the fabulous shopping district of Lincoln Road, the Colony Theater first opened in 1935 as a cinema for Paramount Pictures. The ghosts of Colony Theater are unlike most of haunted Miami and include a perky pooch and a friendly phantom.

The white poodle has been seen running around the movie theater and many say he doesn’t realize he is dead. The phantom has equally mysterious origins but is only identified by his footsteps. He loves sneaking up on unsuspecting theatergoers in the lift or scaring the daylights out of new staff.

Today the Colony Theater is a live performance theater. Haunted places in Miami include the Colony Theatre in Miami Beach.

Miami’s oldest cemetery dates back to 1897 and has more than 9,000 gravestones. Note that there were African-Americans buried here before burials were officially marked. There are separate sections for different types of Miami residents, such as the Jewish dead, or the Confederate dead.

With so many bodies, you figure some of them have to be restless. Amongst some of its most famed “residents” are Julia Tuttle, the “Mother of Miami” and the city’s first mayor, John B. Reilly.

Did you know?  Miami is the only city in the USA founded by a woman, Julia Tuttle. She had a large citrus plantation in the area and she convinced Henry Flagler to extend his railroad south her way so that it became more accessible to the rest of the USA.

Nowadays, the City of Miami Cemetery has more than paranormal activities. There are regular occurrences of grave robberies needed for Santeria, voodoo and other occult practices.

Historian Paul George of HistoryMiami does an annual cemetery tour around Halloween. This annual walking tour of the cemetery is always a sold out success.

Note! Pinewood Cemetery in Coral Gables is another historic cemetery in the Miami area and also super haunted. It’s the final resting place of the original pioneers who settled South Miami, long before the early 20th century industrialists came to build their lavish mansions in the sun.

The Villa Paula was built in 1926 for the first Cuban consulate in Miami, Don Domingo Milord, and named after his beloved wife. Unfortunately, Paula Milord had to have a leg amputation and the complication from the surgery eventually lead to her demise.

At Villa Paula, visitors have reported smelling roses or freshly roasted Cuban coffee wafting through the area. They have heard piano music, mysterious footsteps and knocking on doors, too. Occasionally, one-legged Paula shows up, if you are really lucky.

The Villa Paula is now an art exhibition space for emerging artists and open to the public to visit by appointment. Located in Little Haiti, on the edge of the Miami Design District, its in a perfect place to take advantage of Miami’s burgeoning art scene.

Although the words “Native American burial grounds” should give one pause, Chicago industrialist Charles Deering was unbothered. He built his Miami mansion over a sprawling 444 acres some of which included land sacred to Native Americans.

An explosion during construction killed four of the workers. Charles Deering himself died at the house in 1925. Reports of hauntings at this historic landmark estate are numerous with paranormal investigators reporting over dozens of voices.

Did you know? If the Deering name sounds familiar, Charles’ brother James built the fabulously OTT Vizcaya Estate in Miami. 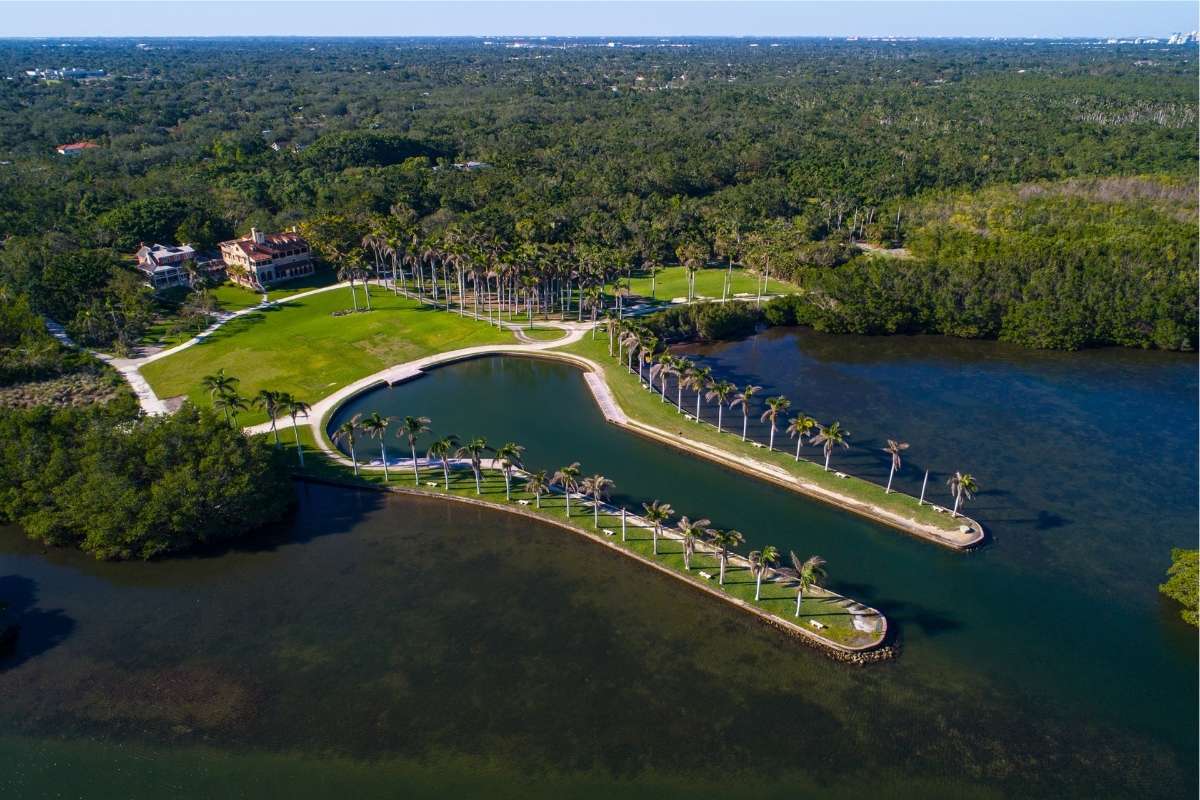 The fabulous Deering Estate runs its own Miami Ghost Tours.

The DuPont Building in downtown Miami was one of the first skyscrapers to be built in the city. It’s most famous story relates to a friend of President John F. Kennedy, Grant Stockdale, who fell from the 13th floor just a mere 10 days after the President himself died.

Coincidence? The Stockdale death is as unclear as JFK’s own assassination.

In the early 1920’s, Edward Leedskalnin got jilted the day before his wedding. So what’s he do? Build a house made out of stacked coral weighing over 1100 tons.

It took him 28 years to build and presumably he forgot about his heartache during that time. He moved tons of coral rock with his skinny little 5 foot tall, 100 lb weighing frame. Now, that’s an obsessive love worthy of Count Carl von Cosel of Key West.

Visitors have reported a shadowy figure looming about the place, which presumably is Ed Leedskalnin, because he seems to have difficulty in letting go of things. The Coral Castle is a weird testament to one man’s obsession.

In 1925, Miami developer and aviation pioneer, Glenn Curtiss had the Curtiss Mansion built for his wife and him. He is credited as the founder of the American aviation industry.

Sadly, he only got to enjoy it (in life anyway) for five years. Starting with his wife, lots of people have reported hearing him in the Curtiss Mansion working on his projects.

For your planning purposes, here is a map of the Haunted Miami places mentioned above.

Map of haunted Miami for a Miami ghost tour