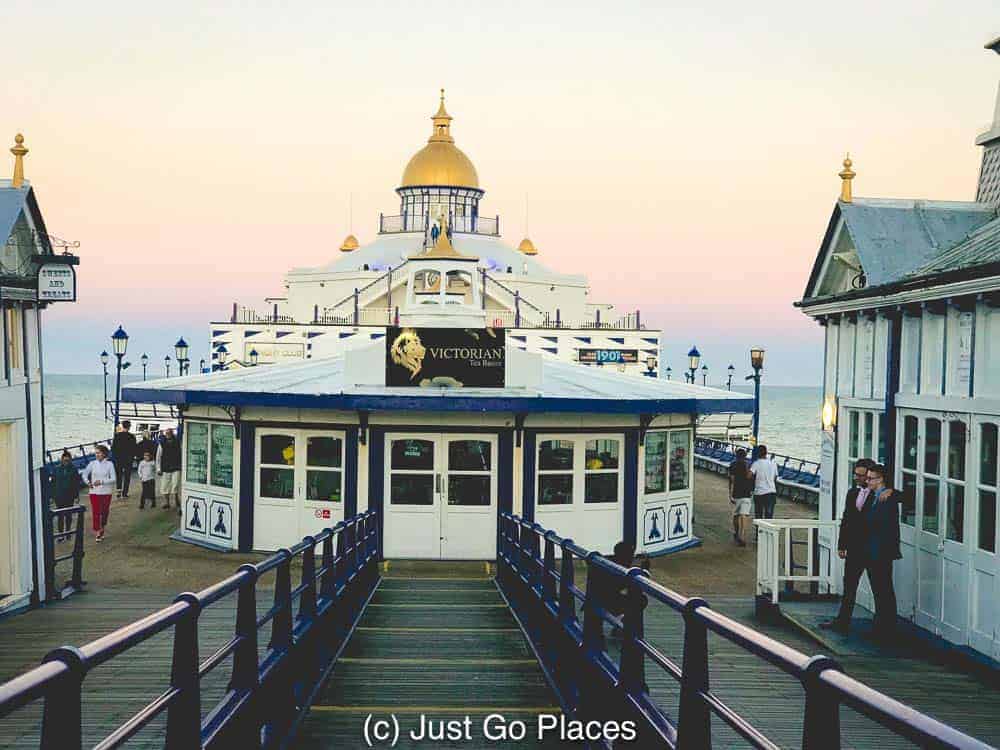 What is it about the English countryside? Why is the beauty so much more than visual? Why does it touch one so?

– Dodie Smith, I Capture The Castle

This quote from one of my favourite books (and movies) expresses the more-ness that is the English countryside. Sure it’s pretty but there’s also centuries of history and tradition inextricably woven into the fabric of what you see. When we recently took a road trip to the Seven Sisters Cliffs from London with our Europcar rental car, we were struck again by how very long the landscape has existed and how very small we are in comparison. Beachy Head, The Seven Sisters Cliffs, Birling Gap – the entire South Coast has seen the arrival of William the Conqueror in 1066, the destruction of the Spanish Armada in 1588 and the non-invasion of Napoleon and Hitler. Events jump in spans of hundreds of years. The South Coast may be eroding slowly but it will outlast us all.

Days Out in East Sussex

As much as we love London, heading out into the English countryside is a real treat. There’s a lot to be said for fresh country air and wide open spaces. A lot of England is accessible by public transport, but we are definitely road trippers! It’s just a lot easier (and often cheaper) to have your own transport when you are travelling with children, too. You are on your own schedule and can make stops as you choose.

We were invited to participate in Europcar’s long term car hire program. This program is super flexible and available at every Europcar in the UK.  It lets you rent a car for 28+ days at more affordable rates than the usual rental but with more flexibility than owning/leasing. In addition, with one month’s notice you can switch out your car if your needs change.

We had a Volkswagen Golf in London through the Europcar long term program which is a great city car. It’s the right size for running errands and squeezing into small parking spots.

There are times though when a big car can come in useful. We traded in our Volkswagon Golf for a 7 seater Sharan. Europcar have a delivery and pick up program so the exchange was done in front of our house which was superconvenient. I’m so busy that I don’t know if I’d even get around to changing a car if it wasn’t so easy!

We used the Sharan for running some of our bigger errands in London (such as an Ikea trip!), taking visiting friends to the RHS Hampton Court Flower Show and going on a road trip.

We went on a long weekend away to the South Coast and the South Downs National Park. I’ve got a family of bikers so with the extra space we were able to throw our bikes in the back along with our luggage. As any veteran road tripper knows, getting somewhere is as much fun as the destination itself!

7 Things To Do in Eastbourne

One of the things we take for granted today as a summer ritual, the beach vacation, started only in Victorian times. The Victorian seaside holiday transformed towns such as Brighton and Eastbourne.  When the fashionable people decided it was healthier to visit the shoreline instead of taking the waters at a spa town like Bath, everyone else soon followed.

Eastbourne has the unfair reputation for being a sedate town suited for an elderly population. This reputation was gently mocked in the hilarious coming-of-age book  Angus, Thongs and Full-Frontal Snogging where 14 year old Georgia lives in Eastbourne and moans that nothing exciting ever happens to her.

Fun Fact!  Filming for the movie, Angus, Thongs and Full-Frontal Snogging was done along the Eastbourne pier and seafront but the house the family lived in was actually located in nearby Brighton.

Don’t trust conventional wisdom! There’s lots to do in this charming town for everyone.

Marine Parade is a seafront road with lots of hotels and cafes. The buildings in this area were built between 1790 and 1840.

One of the hotels on Marine Parade had an old-fashioned Victorian bathing machine on display which my kids found fascinating. Victorian ladies would be wheeled down into the water in this machine by horses so that they could get into the sea with modesty intact.

Eastbourne Pier has been blown away by storms, exploded by mines, and ravaged by fire but it’s still standing! The original opened in 1870 but what you see now is the latest 2015 incarnation. Some of the attractions include a fish and chips store (naturally!), a Victorian tea room, a jazz lounge and assorted entertainment events.

The Eastbourne beaches are pebble beaches. There’s a wide swathe of beach right in front of Marine Parade so you don’t need to venture too far. On the other side of Eastbourne Pier there is also the Grand Parade beach.

We saw the most charming contemporary little beach huts at Eastbourne Beach. Our favourite beach hut was on a revolving device so you could move the beach hut view to suit your needs. The exterior had an outdoor shower. The interior had a little kitchen, sitting area and lofted sleeping area. You can rent it for a very reasonable £45/day (£50 in July/August).

Little Chelsea is a trendy area in Eastbourne for eating  and shopping conveniently located near the Eastbourne train station. Although not a very big area, it’s got a charming selection of delis, cafes and boutiques.

The Eastbourne Redoubt was built in the early 19th century as part of the country’s defence against a possible invasion by Napoleon. By the time construction was finished though, the threat of an invasion had passed. During World War I, the redoubt was used by military police and during World War II, it was used for storage.

Nowadays, the parade area and the top of the fortress are open to the public free of charge. There is a small military museum which does charge admission.

The Eastbourne Open is held annually in June at the Devonshire Park Lawn Tennis Club near Eastbourne town center. The Eastbourne International usually gets a few big names and is the last grass court tournament before Wimbledon. For example, this year Andy Murray played at Eastbourne as part of his comeback from injury.

7 Places To Visit Near Eastbourne

Beachy Head East Sussex is the UK’s highest white chalk sea cliffs (not the white cliffs of Dover!). It’s appeared in films (such as James Bond and Harry Potter) and on television commercials. In fact, the Beachy Head cliff is often a stand in for the Dover Cliffs because they are bigger and whiter.

The Seven Sisters are chalk cliffs on the South Downs National Park that run from Eastbourne to Seaford. There are technically now 8 sisters because the erosion of one cliff has created another one.  You get the best views of the Seven Sisters cliffs from Seaford Head.

Fun Fact! Coastal erosion means that the Seven Sisters erode by an average of 0.4m annually and Birling Gap by 0.7m.

The Seven Sisters Country Park is 280 hectares of cliffs, parkland and river valley. It’s great for walking and cycling. There’s a cafe behind the Visitor’s Center which is located across the road from the entrance to the country park.

Run by the National Trust, Birling Gap is perfect for walking along the cliffs and for playing on the beach. You get to the beach by a staircase from the cliff. Kids will enjoy fossil hunting (remember the Jurassic Coast is a bit further West along the English Channel) and exploring the rock pools that form when the tide goes out.

Friston Forest is perfect for walkers and for cyclists. The two walking trails are easy to do with children and not very long (between 1- 1.5 miles). The mountain biking is more challenging but there is an easier family route you can take.

Alfriston is a village in the Cuckmere Valley which is pretty as a picture. In fact, it was included in The Telegraph Travel’s list of England’s prettiest villages.

Alfriston may be a small village but in true English style, has several pubs. In front of the George Inn, there is a masthead from one of the ships of the Spanish Armada that locals salvaged. The town is also the site of the very first National Trust property ever purchased, a 14th century thatched clergy house.

Fun Fact! The hymn “Morning Has Broken” was written in Alfriston about the village in 1931 and reached worldwide fame in the 1970’s when sung by Cat Stevens.

There is a zoo with lots of interactive exhibits as well as animal exhibits that kids will enjoy – penguins, meerkats, butterflies, snakes etc.  In addition, there is a large play area where kids can run around and let off steam. A dedicated Hello Kitty area will delight all fans of this cute Japanese export.

It reminds me of Sesame Place in the USA but more educational and with less water.  You can easily spend an entire day here and leave with happy, tired children.

You are reminded that you are in 1066 country at Pevensey Castle. Pevensey was where William the Conqueror landed in 1066 changing the course of English history forever. We are talking 1600 years of history here! Although in ruins, the Castle is still majestic and is run by English Heritage.

Be aware that accommodation in Eastbourne and the surrounding area does fill up quickly because it is a popular domestic vacation spot.

You can stay in pretty little Belle Tout Lighthouse which is a bed & breakfast near Beachy Head where the rooms have stunning views. There is a minimum 2 night stay.

The best hotel to stay in Eastbourne is the 5 star Grand Hotel. It’s located on the side of Eastbourne that’s closest to Beachy Head and near the popular dining and shopping area of The Meads.

The Grand Hotel was full and so we stayed at York House, Best Western. Our room was huge even with a Queen bed, a single bed and a sofa bed. We had a room overlooking the sea and fell asleep to the sound of the waves crashing on the shore.

The Crown and Anchor is a pub on Marine Parade which not only serves food but also offers live music on the weekends.

Fusciardi Ice Cream Parlour on Marine Parade serves more than delicious ice cream. You can get breakfast there as well as simple dinners like jacket potatoes and sandwiches.

Cuckmere Inn has good views of the Seven Sisters Country Park and also offers outside seating.

How To Get There

You can drive to Eastbourne and its environs from London relatively easily. From the M25 ring road, take the M23 which becomes the A23. At Brighton take the A27 which goes all the way to Eastbourne.

Although Eastbourne has a train station, you definitely need a car to visit the South Downs easily.

This post was written in partnership with Europcar. This site generates income via partnerships with carefully-curated travel and lifestyle brands and/or purchases made through links to them at no extra cost to you. More information may be found on our Disclosure Policy.