We weren’t sure about seeing the Haus des Meeres in Vienna because we have been to many other aquariums in our travels.  My friends, though, insisted our children would like it because they had heard rave reviews from other children about it.

After our epic fail that was our first failed experience with the Spanish Riding School, we found ourselves with a few hours to kill on our last day.  I’m so glad we did!  My children thought it was one of the best things they did in Vienna.

The Haus des Meeres (or the Aqua Terra Zoo) is not your ordinary aquarium.  For starters, it is based in an anti-aircraft gun and battle tower from the World War II era.  The tower is over 150 feet tall with 11 foot thick walls.  During World War II, it held radar equipment on the roof which could be lowered into the tower during air raids. 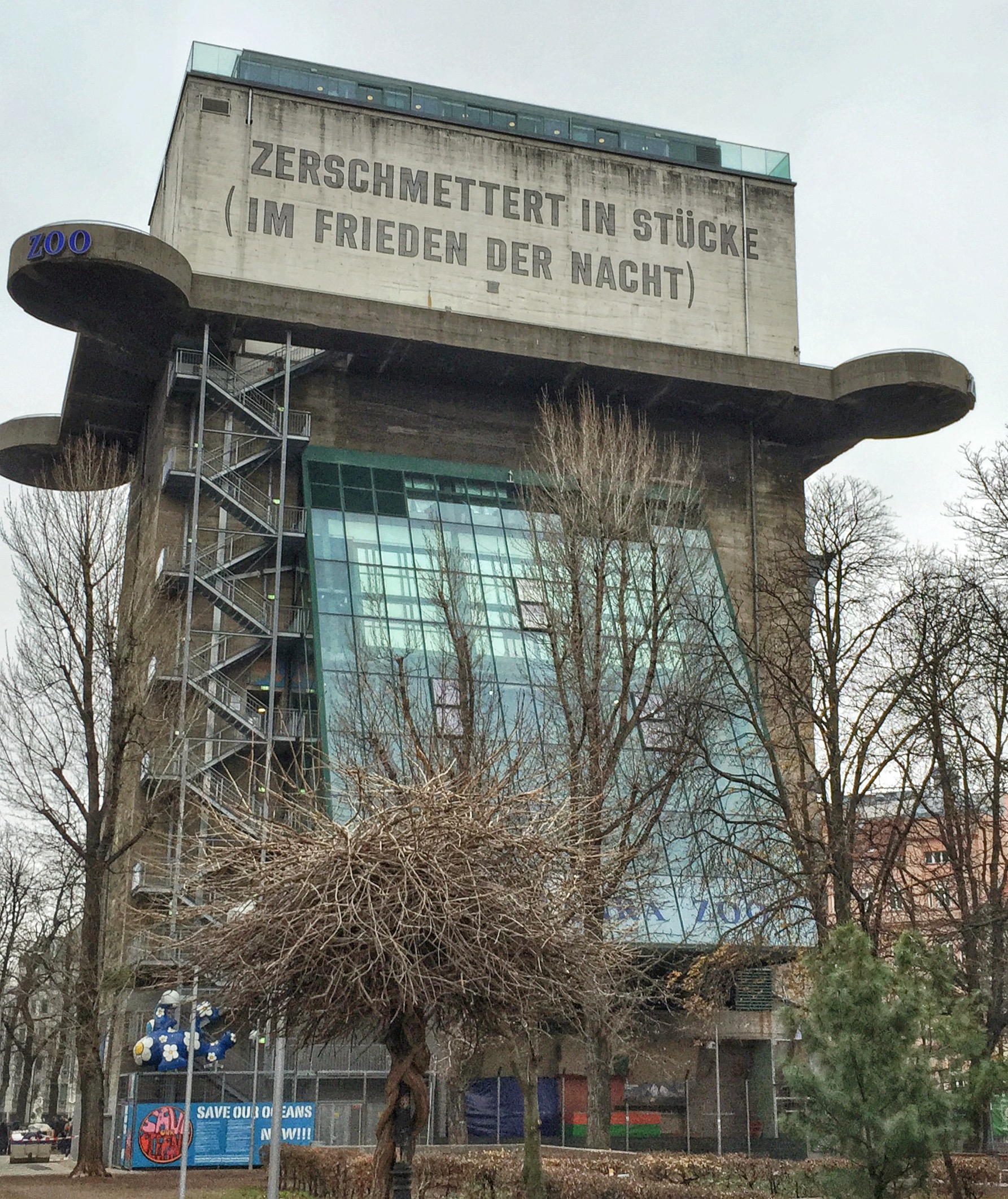 The tower has now been converted into an aquarium/zoo which houses over 4,000 square meters of habitable area with over 10,000 animals.  Thanks to the outstanding conversion the aquarium gets hundreds of thousands of visitors per year.  Most of the visitor’s money goes back into funding the aquarium.

The Haus des Meeres also has more than the usual aquarium.  It’s also a vivarium with a tropical house with free-roaming birds, turtles and monkeys.  The tropical house is built as a conservatory-style extension to the sides of the tower.

My children loved seeing monkeys and other animals clambering on vines above them.  The birds would whoosh right past our faces.

The tropical house maintains the temperature and sunlight conditions as if the animals were outside. Needless to say, it was warm and humid! 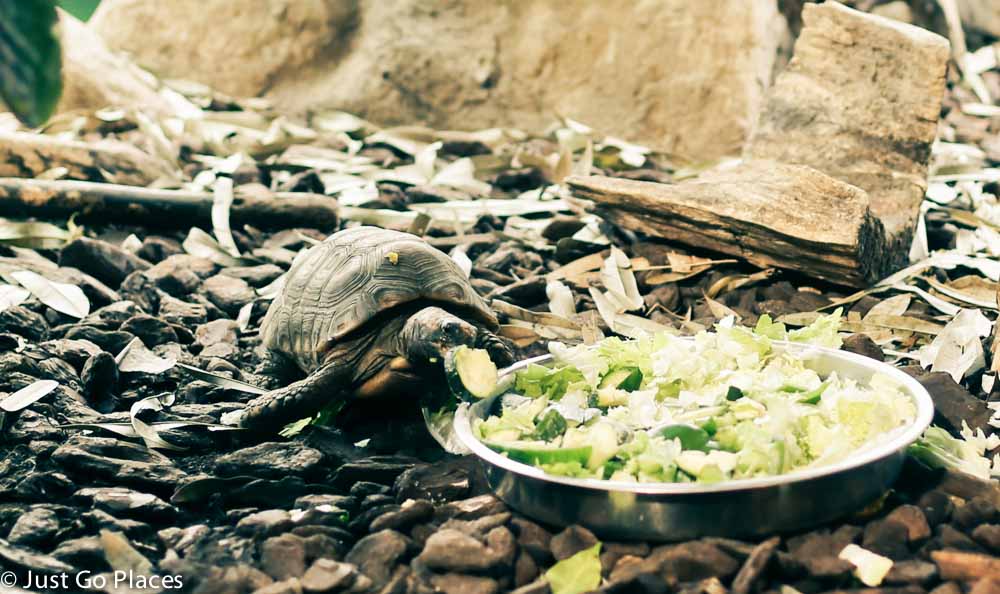 The aquarium lays claim to Austria’s largest shark tank.  There is also the usual fresh and saltwater fish tanks. 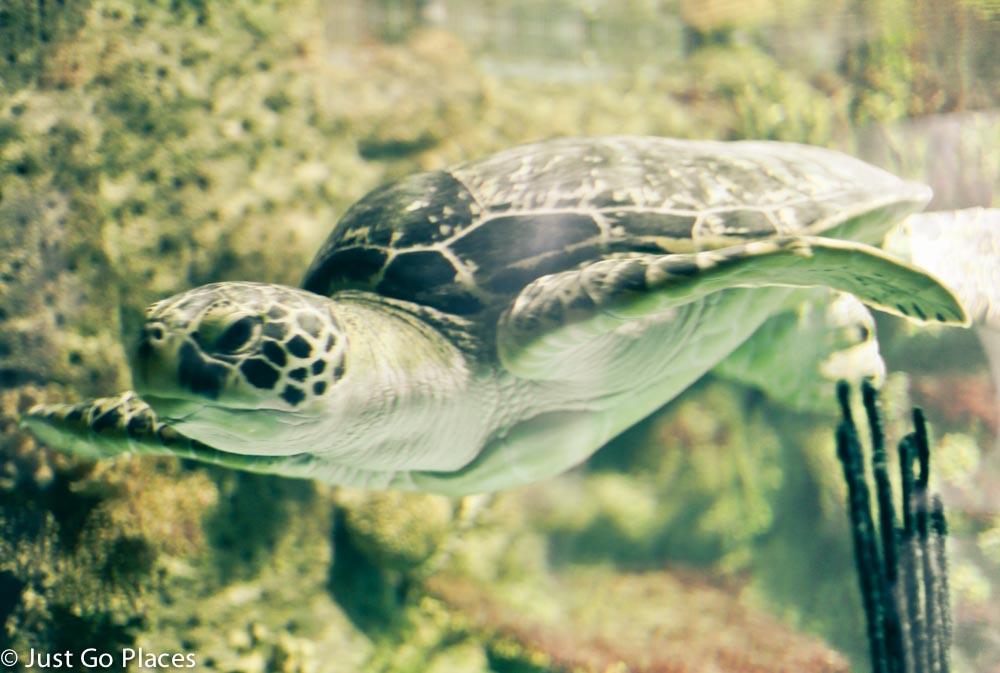 There is also a terrarium with various nasty bugs and reptiles fascinating to children, such as scorpions and snakes.  You can get pretty up close and personal to the animals, including the frogs, lizards and crocodiles.

From the top floor roof deck, you get gorgeous views of Vienna laid out before you in every direction.  There is also a nice cafe up on this 9th floor.

The Haus des Meeres was not the biggest aquarium we’ve been to but it was definitely the coolest.  Due to its architectural constraints, it is necessarily quite small and manageable.  You take an elevator to the top of the tower and work your way down the stairs and out through the obligatory gift-shop.  Frankly, I’m not sure it would be very pushchair-friendly but there really isn’t much walking involved.

The Haus des Meeres is open daily from 9 AM to 6 PM  and open later on Thursday nights.  It is located in Esterhazy Park in Vienna’s 6th district, a short couple of blocks from the metro stops at Mariahilfer Strasse.  Children under the age of 3 are free.  Be forewarned that it can get crowded with families.