In the early years of the new millennium, Iceland got carried away with some good financial times revelling in its prosperity and flashing its cash.  Of course, the party was broken up in 2008.  Why did Iceland party like a high school kid in a Katy Perry song (“Last Friday night, Yeah, we danced on table tops, And we took too many shots…”)?  Historically, the country was dirt poor and the population eked out a living from the harsh land through farming and fishing.  For example, in the early 20th century, 96% of the population were farmers.  You can get a really good look into how Icelanders lived historically at Glaumbaer, a traditional Icelandic farmhouse, that is now a museum. You can see how small the doors were because my daughter is a not very tall 9 year old.

When we stumbled upon Glaumbaer, we found a cluster of little mounds in a field.  When we were told that Glaumbaer was a local stately home, I had visions of manor homes a la English country homes. What we found at Glaumbaer resembled more like hobbit houses strung together. Admittedly, they were grander than the turf house we visited in the USA. The house from the back

Glaumbaer is made in the traditional way with turf layers laid in a herringbone pattern.  Traditional Icelandic houses were made of turf because the Vikings had decimated the forests to build ships and then allowed overgrazing by sheep.

At Glaumbaer, the roofs of these houses are turfed as well, the front is wooden and there are little wooden windows set into the turf.  Although one house, each little section is made individually in order to support the weight of the turf roof.  There are 13 little sections that are attached together by a long hallway to create the manor house. The rooms included a guest room, kitchen, pantries, store rooms and sleeping quarters. 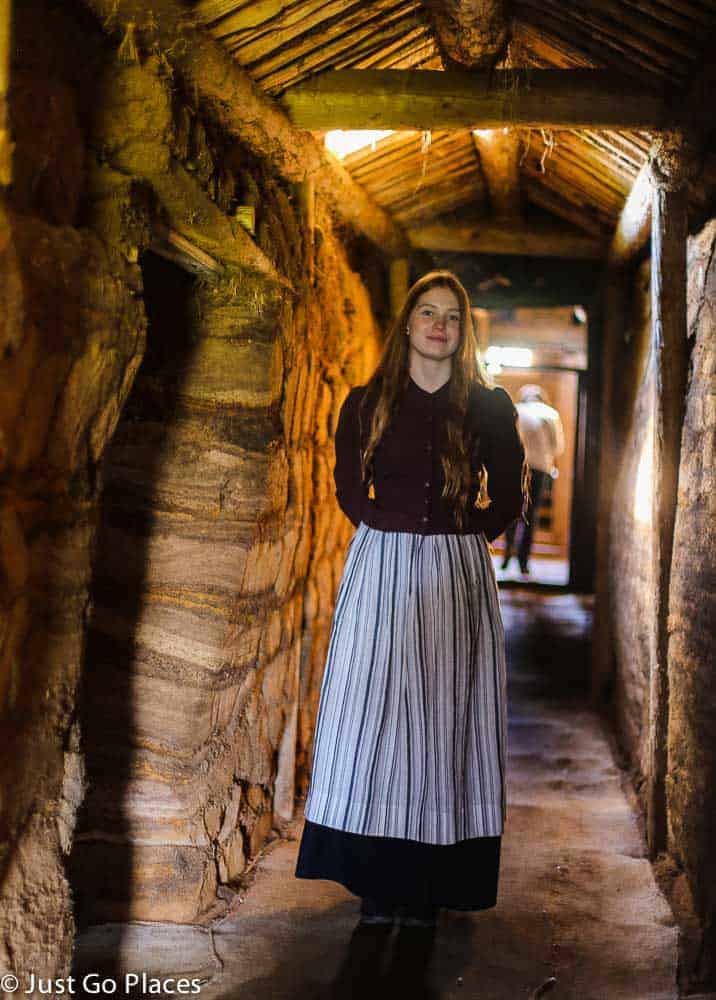 A museum guide in traditional clothes stands in the main hallway.

Although other farmhouses could be made from stone, there is very little stone at the Glaumbaer farmhouse because there wasn’t enough stone on the land for building.  The stone is mostly at the bottom of the house to prevent rising damp.

The current buildings date from the mid-18th century.  It was occupied as a farmhouse until 1947 when it became a conservation site.

Although this farmhouse is considered one of the grander farmhouses, it is a good representation of what other farmhouses would have looked like.  They would have been similar in construction and rooms but smaller.

The History of Glaumbaer

There has been a farmhouse at Glaumbaer since the Settlement Times (the 11th century).  The first owners were Thorfinnur Karlseffni and his wife Gudridur Thorbjarnardottir who were returnees from Vinland (the Icelandic settlement that was started by Vikings somewhere in North America). Their son, Snorri Porfinnson, who later inherited the farm, was actually the first European born in the Americas.

There is a modern statue to Gudridur and Snorri in the church near the farmhouse.  Incidentally, the first church built near the farmhouse was built by Snorri when his mother went to see the Pope in Rome on a pilgrimage.

I am completely impressed by the courage and hardiness of Gudridur.  She not only returned from Vinland with a baby but then set across Europe to Rome and back to Iceland in the 11th century.  That is quite the trek even today with modern transportation.  Of course, the family story is told in the Icelandic sagas. Gudridur and her son Snorri

Many of the other owners of Glaumbaer were pastors.  For example, in 1845, records show the house had 24 people – the pastor, his family, lodgers, labourers and servants.  The pastor would have taught local boys out of the home as well.  They would have been given a basic education in reading, writing, math, science, geography, history, Danish and Latin.

It’s interesting that Icelanders were traditionally very poor but they were relatively well-educated.  This fact helped propel them from a mainly agrarian society to a modern European country in the 20th century.

A Photo Gallery of Glaumbaer

This is the kitchen where meals for up to 20 people were cooked.  The fuel used to heat the pots was either peat or dried sheep dung.  Smoked meat was hung from the ceiling to dry. 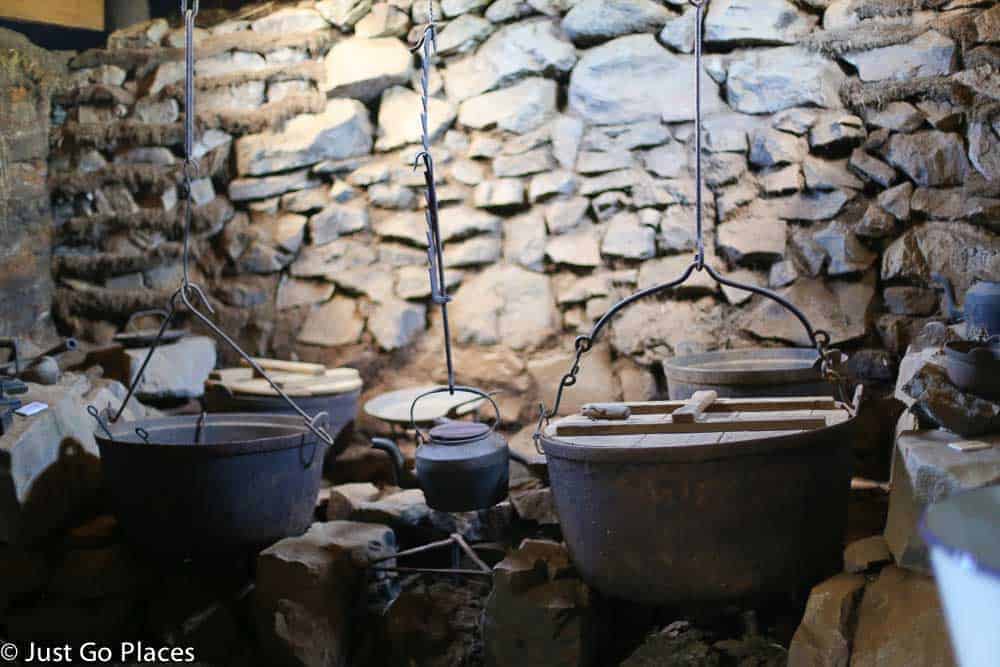 Most of the kitchen utensils and implements were wood and carved at home.  The landscape was inhospitable to trading conditions – you couldn’t just nip out to the store as we are used to. Kitchen utensils including the churn to make skyr

You made food and stored it in barrels, such as black pudding, skyr etc. The beds were lined in a long room against each side.  The women had the side with the windows because they would need light to spin and sew.  Most people would have had to share a bed.  Although there was hardly any privacy, what you kept under your pillow was considered sacred. No one would look at what you put under your pillow.

Each person had a wooden bowl with a lid that was their own dish that they kept above their bed. The housewife would serve food into this dish and then everyone would eat on their own bed. At bedtime, people (in pairs) would snuggle under blankets to stay warm.  Labourers couldn’t get married until they could afford their own farm.  So many of these labourers never married because they couldn’t afford to.

This bed is the equivalent of the master bedroom because this bed is where the master of the house and his wife stayed. Turf buildings kept their heat very well which is a good thing because the interiors weren’t heated.  The wool clothes that people wore were generally enough to keep them warm. Little dormer windows in the roof Glaumbaer is easy to spot off Route 75 (off the main Ring Road) in the North of Iceland. In all likelihood, you will spot the church first as it is more striking that the manor house. In addition to the main museum house, there are separate houses that contain a gift shop as well as a charming tea room.

National Geographic explores Iceland’s tradition of turf house building which was started by the Vikings.