Before we had children, my husband and I decide our lifetime ambition would be to visit all of the Small Luxury Hotels in the world.  Yes, we are really that shallow.  Unfortunately, lots of the SLH hotels don’t take little children and so our plan was put on hold.  My recent child-free mini-break to Paris was the perfect opportunity to go back to an SLH.

We stayed at a very nice boutique SLH called Le Pavillon des Lettres chosen primarily for its location close to where Mr. N had to work.  It’s near the Champs-Elysees and pretty much equidistant from the Arc de Triomphe and the Louvre.  Located right across from the French Ministry of the Interior, there are lots of snazzily-uniformed French National Police milling around.  And, it’s around the corner from Rue du Faubourg Saint-Honoré which contains pretty much every major fashion brand in the world.

With only 26 rooms, each of the rooms is named after a different literary great from A to Z.  I thought this idea was charming.  We were in Z for Zola.

Despite its central location, and the fact that we were on a low floor, we heard virtually no street noise.  Moreover, the windows were covered in interlined silk curtains and the walls were lined in linen fabric.  We felt cocooned when the curtains were drawn. I’m sure all that fabric helps reduce the noise too.

The Pavillon has nice little touches for its hotel guests.  For example, the room had an electrical adapter if you had forgotten yours.  I had the incongruous situation where I plugged in my American laptop into a British adaptor into a French adaptor.   I wonder what happens if you are American travelling without a British adaptor?!  There is also a Mac laptop available in the hotel lobby for guest use.  The hotel staff were friendly (in Paris!) and helpful.

The hotel room itself was small but well designed.  For example, the bedside lights were built into the headboard in order to save space on the small bedside tables.  The built-in desk between two cupboards on one wall reduces visual clutter.  The bathroom is on trend with a sliding glass door which allows you to look directly into it from the bedroom.  Mercifully, the toilet is tucked around the corner from the glass door.

The colour scheme was predominantly neutral – taupes and chocolate brown with pops of Hermes orange in unexpected places, such as the stair bannister and the bathroom ceiling.  In fact, the colour scheme did remind me of Hermes packaging.  What do you think? 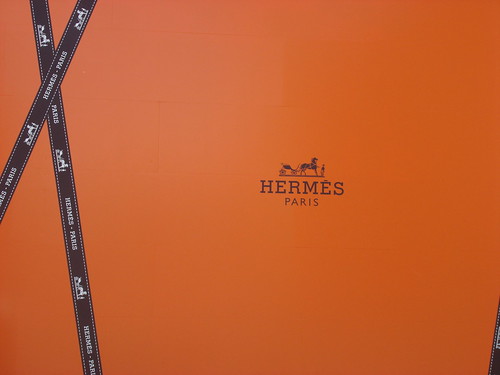 As a blogger, I need good Wifi.  The hotel Wifi was fast and worked well.  However, you  needed to put in the code every time you shut off your computer or smartphone (even when it was a timed shut down through lack of use).  I found constantly re-entering the code a bit of a pain.

These gripes are fairly minor.  Overall, the Pavillon is an excellent hotel in an incredibly convenient location. I prefer smaller hotels and this one has a lot of positive points.  I would return here again.