Primrose Hill is one of my favourite neighbourhoods in London.  When we were house-hunting in the area, we were choosing between Primrose Hill and St John’s Wood.  In the end, we choose St John’s Wood because the houses were nicer and it was less of a so-trendy-it-hurts scene.  A disappointed Primrose Hill real estate agent told us that we were making a big mistake and that we would miss Primrose Hill’s vibrancy.  We didn’t.  But we did visit often as it was only across the park.  If you would like to experience a part of London that the average tourist does not frequent, I would recommend the Primrose Hill neighbourhood.  Along those lines, I’ve put together a list of 5 things you need to know about Primrose Hill in London.

Where is Primrose Hill?

Primrose Hill itself is a large hilly park just north of Regents Park Zoo (and a part of the Royal Park of Regents Park).  The two parks are intersected by Prince Albert Road which connects crazy cool Camden with sedate upscale St. John’s Wood.  The Primrose Hill neighbourhood is in the middle picking up aspects of both of its neighbours. The popular press always talk about the celebrities that populate Primrose Hill.  In my experience it has been overrun with general wealthy City types.  The heyday of the celebrities living in Primrose Hill was in the 1990’s.  If the Daily Mail is to be believed Kate Moss, Sadie Frost and her husband Jude Law threw crazy house parties.  Adding music cred, the Gallagher Brothers also lived nearby (several ex-wives ago). Most of them have moved onto other parts of North London (mostly Highgate) which have more privacy, leafier gardens and better schools.  Yes, even the party kids have to grow up.

When the area was developed in the early 19th century, Regents Park and Primrose Hill were considered suburbs because London itself was much smaller.  Today it is fairly central and firmly within zone 2 of the Tube.

A Brief History of Primrose Hill

I’ve heard taxi drivers tell me that Primrose Hill was actually a plague pit from the 14th century.  Plague pits were where the bodies of people who died from the Bubonic Plague were dumped.  Almost 1/3 of the population of the City of London died from the plague and so the bodies were just dumped as quickly as they could be found in large burial pits. This story could potentially be true as there have been plague pits found nearby and the area would have been sufficiently outside of the medieval city to be a countryside dumping ground. No one has actually dug it up so we don’t know if it is.  Usually these things are  found when you are excavating for a tube line extension or similar.

Not much happened in Primrose Hill from the time of the supposed plague pit until the mid-19th century.  The rapidly expanding middle class in London needed somewhere to live.  Thanks to the British Empire, London was the most populous city in the world at the time.  So, enter the developers. In the early 19th century, architect John Nash, with the blessing of the king, was building villas for the ‘great and the good’ in Regents Park.  That scheme wasn’t as extensive as proposed because Nash was more creative than business-minded.  At the same time, St. John’s Wood was being developed as one of the first ‘suburbs’ of London with spacious villas and low-density housing. 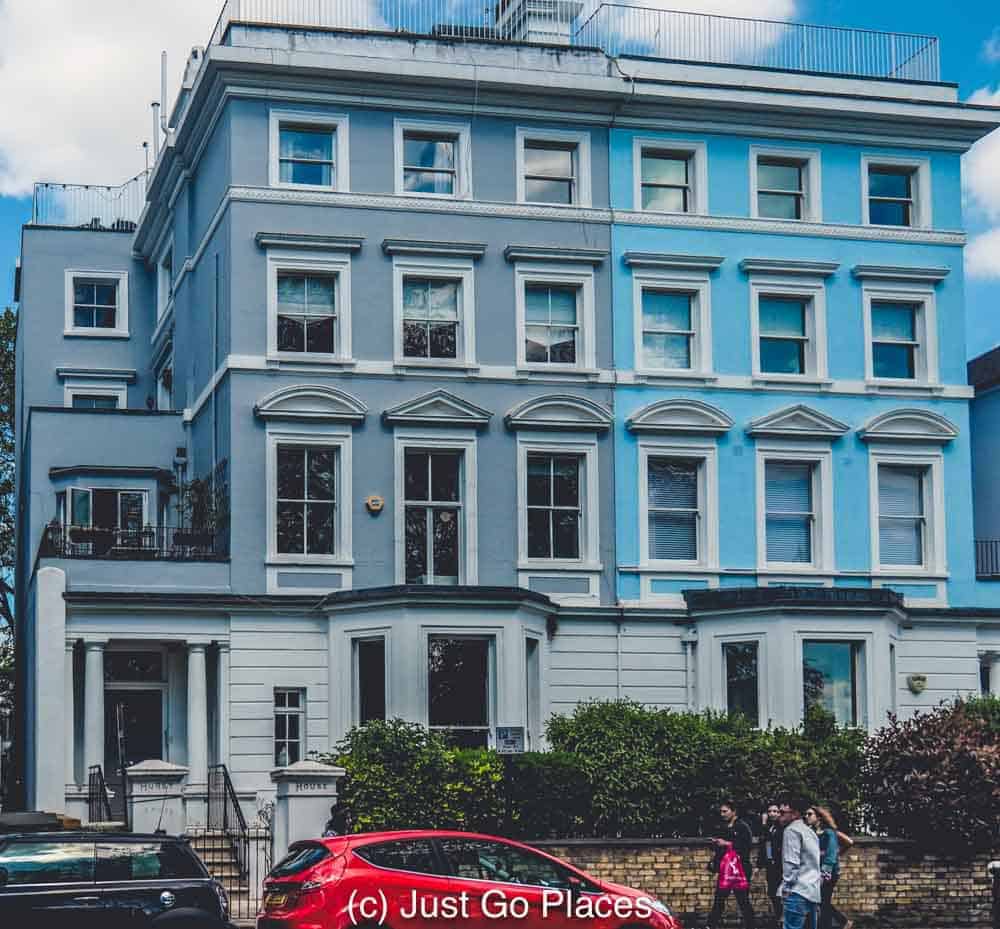 The semi-detached villas were built to accommodate a family and their servants.

Primrose Hill was likewise tagged for development but, along the way, it became less villas and more terraced houses.  Unlike the other two neighbourhoods, the railroad tracks (and their accompanying industrial elements) were too close for comfort for the aspiring middle-classes who wanted villas.  There were some villas built which housed single-families who were comfortably wealthy sufficiently far from the tracks. 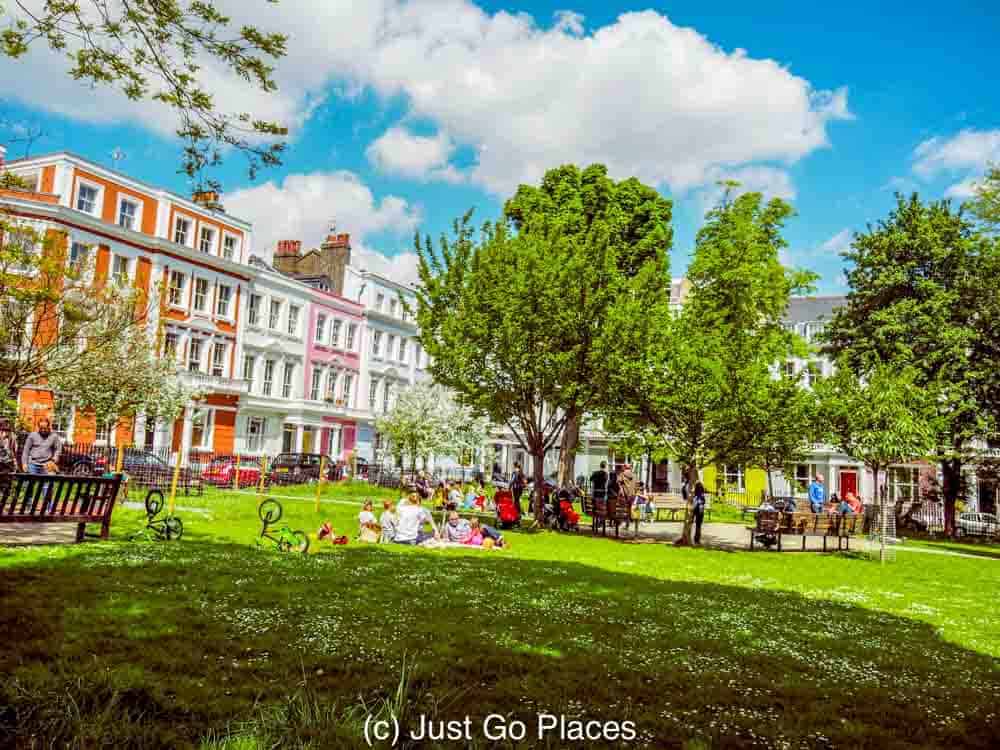 An idyllic sunday in the park when life is good.

So, what was a poor developer to do with rest of the land?  They crammed in housing.  Where there would have been a pair of semi-detached villas on a lot, they put about 5 terraced homes.  These terraces became homes for the working class with families taking an entire floor (or if they were really poor, stuck into one room).

The Primrose Hill of Today

Primrose Hill likes to think of itself as a village.  (Somewhat pretentious because it never was!).  When we were house-hunting, one of the things that put me off were all the AGA cookers.  If you live in the English countryside, you have to cook on an AGA cooker/oven.  It’s in the contract as soon as you buy a home in middle-codswallop-on-the-river.  Along with the subscription to Country Life magazine.  You really don’t need one in London other than to pretend you live in a little village in the middle of nowhere.

What are the 5 things you need to know about Primrose Hill?

Regents Park Road is the Epicentre

The main drag in Primrose Hill is Regents Park Road.  Although the area does not have chain stores (e.g., Pret a Manger, McDonalds), it does have branches of select stores.  Dahling, you have to shop rich to understand the difference.  For example, there is a branch of upscale Nicolas (a French wine store) and Graham and Greene (boho-chic interior furnishings). 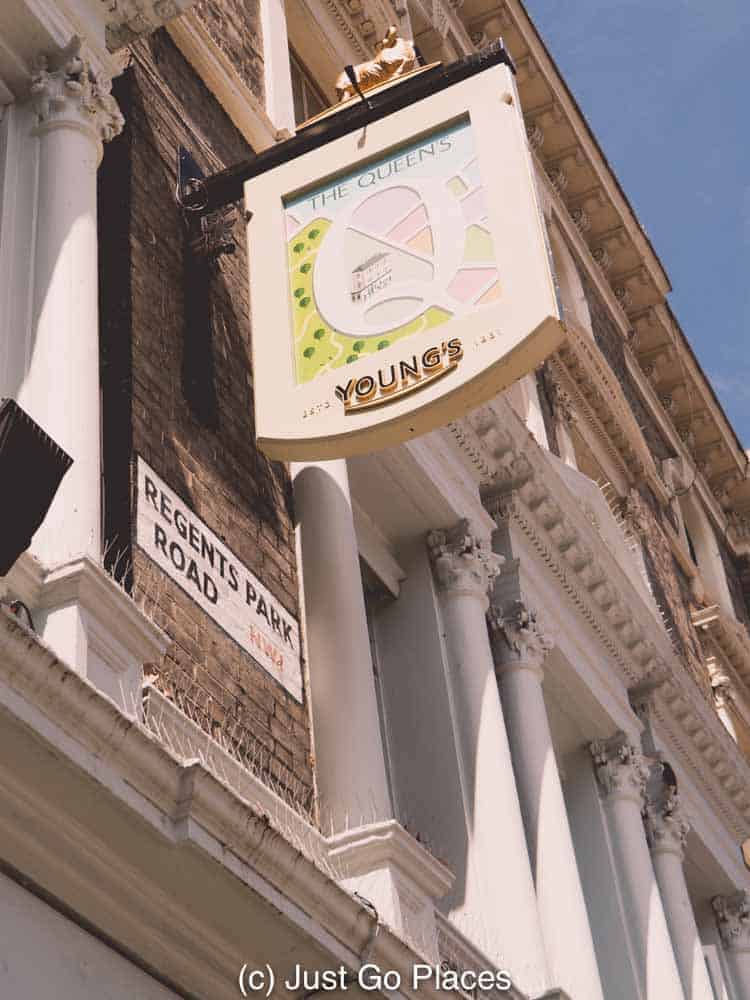 One of the many great pubs in Primrose Hill.

I personally love Primrose Hill Books which is an independent bookseller which has a curated selection of books (written by locals as well as others).  Primrose Hill has a long history of leftist/liberal intellectual credentials with numerous famous locals having lived in the neighbourhood, such as Frederich Engels (philosopher), Alan Bennett (playwright) and the Milband Brothers (politicians).

Thin and rich does not mean you have to be stupid.

Be Serious About Food…

Of course, Primrose Hill is home to a lot of foodies.  Or, foodies, if only they could bring themselves to eat carbohydrates.  Maybe they just smell the fresh aroma of good bread.  Anthony Delicatessen has great Italian food where my son is a big fan of the San Daniele prosciutto.  On Saturdays, there is a farmer’s market held in the neighbourhood.

Do NOT come into this neighbourhood with plastic bags.

In terms of restaurants, Greenberry Cafe is popular with the ladies who lunch crowd with a well-deserved reputation for good food.  Lemonia is a local favourite Greek restaurant which has been there for ages.  People are always asking us to lunch there – it’s good but not great in my opinion.

Shepherd’s Foods is a little supermarket along the lines of Partridges in Sloane Square which in turn tries to be the cooler version of Fortnum & Mason.  Not surprising since the same family (Shepherd) own both Shepherds and Partridges.  Just like Partridges, you will find a selection of American brands at Shepherds. One of several fabulous wine places in Primrose Hill

The fashionistas will also be happy in Primrose Hill.  I love Anna, a store that has been there for years and has great sales.  On the less expensive side, you also have Fara Kids (a charity store which sells hardly-used and brand name hand-me-downs from local rich kids).

There are side streets nearby which has more stores, restaurants and pubs.  For example, Gloucester Avenue was one of the roads that unluckily backs onto the railroad tracks on one side. On Gloucester Road, we really like The Landsdowne Pub and, just down the road, The Engineer. The Lansdowne Pub has a great restaurant upstairs (with a roof terrace overlooking the railroad tracks). The Engineer has a great outside courtyard area to hang out in the sunshine.

The Engineer has a charming courtyard in the backyard.   In between the two pubs, there’s Primrose Bakery which is a neighbourhood favourite.  Across from The Engineer, next door to high-end deli Melrose and Morgan you can take a nice stroll along the canal towpath.  One way will take you to funky Camden Town Market and the other way will take you to the genteel prettiness of Little Venice.

In my experience, the pubs in Primrose Hill are always packed.  It’s a good thing then that they are great places to hang out!

You have to understand that the people in Primrose Hill love dogs.  Not only is the park nearby, having a dog is part of that English country living thing.  You can’t take a long bracing walk over the rolling hills of the English countryside with a cat, can you?? One lucky doggie riding in style.

Primrose Hill really is a walk across Prince Albert Road from Regents Park.  From the top of the hill, you will get fabulous views across London.  It is easily accessible by tube as well (Chalk Farm Tube Station).

I think the nicest way to visit if you are a tourist is to take in the very pretty Regents Park and then have a lunch/dinner/drinks in Primrose Hill. As soon as you leave the Baker Street area, the crowds that characterise tourist-central-London melt away.  London’s charms are much easier to appreciate if you are not constantly being jostled by people.  You will definitely find yourself hanging out with the London locals (and possibly a celebrity).  After Primrose Hill, it’s a short walk to visit Camden Town  (maybe via the scenic canal path route near Melrose and Morgan?) and its market mayhem. Be forewarned, you will once again find yourself with the throngs having left idyllic Primrose Hill behind. We really loved Primrose Hill, and almost moved there when it was time to choose where to
live in London. Discover why you need to visit Primrose Hill, London, an area filled with
exquisite bookshops, cafè and boutique stores. Primrose Hill Park also boasts one of the
best views over London and you shouldn’t miss a sunset from here! #PrimroseHill #london
#londoncity #uk